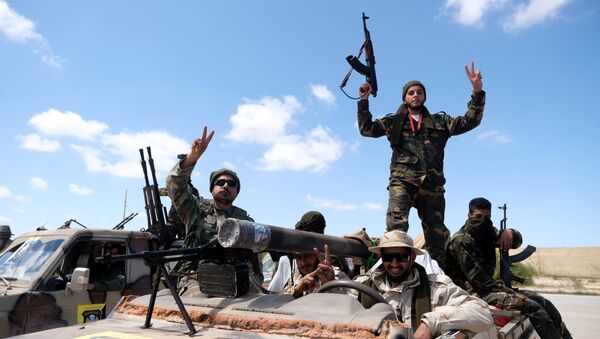 WASHINGTON (Sputnik) - Libyan Field Marshal Khalifa Haftar received a pledge from Saudi Arabia of tens of millions of dollars to bankroll a military offensive to seize the capital of Tripoli and oust the nation’s internationally recognised government, according to a report published by the Wall Street Journal on Friday.

Saudi Arabia promised tens of millions of dollars to help pay for the operation, senior advisers to the Saudi government told the Wall Street Journal.

The offer came during a visit to Saudi Arabia that was just one of several meetings Haftar had with foreign dignitaries in the weeks and days before he began the military campaign on April 4, the report said.

While the United States and the European Union have called on Haftar to avoid military conflict, other powers have provided weapons, funds and other support that have aided Haftar's quest to take control of the oil-rich Libya, the report said.

Reports: Haftar's Army Strikes Military Base of National Accord Gov't in Tripoli
Haftar leads the strongest of multiple armed factions that have carved up much of eastern Libya following a US- and EU-backed Islamist uprising that overthrew and killed long-time leader Muammar Gaddafi in 2011.

Haftar is attempting to unify Libya by replacing the internally recognized Government of National Accord, which is based in Tripoli, but exercises little authority beyond the capital, according to published reports.