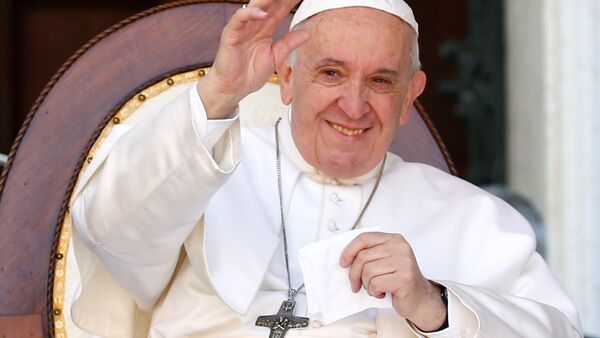 The 82-year-old pope pleaded for peace in a striking gesture during a meeting with leaders from the troubled country that gained independence from neighbouring Sudan in 2011 and then was mired in a violent internal conflict. Following the military takeover in Sudan, concerns are being heard that the fragile peace might be in peril.

Pope Francis knelt and seemingly kissed the feet of leaders of war-torn South Sudan, President Salva Kiir and rebel-turned opposition leader Riek Machar, as he pleaded with them not to let blood flow in their home country during a two-day retreat at the Vatican.

He warned that there would be fights among them but called on both to keep the arguments inside the office.

“People are wearied, exhausted by past conflicts: Remember that with war, all is lost!” the Pope said.

The 82-year-old pontiff’s move stunned clergymen and visitors as well as netizens from all over the world. Many criticised his kneeling, dubbing it a “new rock bottom".

Everything he does and says is cringeworthy, unwarranted, ridiculous and pathetic, but this is a new rock bottom….It doesn’t even make sense to do this. I am starting to think he’s being drugged. This looks like a Pope on Adderall and Ecstasy.

​Some recalled another “kissing” controversy with the Pope as he seemed to try dodge the faithful’s kissing his ring on one video.

READ MORE: It Was Getting out of Hand: Pope Explains Ring Kissing Controversy

@EdwardPentin Just a week ago the Pope doesnt let the faithful kiss his papal ring for "hygiene" reasons, today he gets on the floor to kiss shoes. 😒

​Others stood up for the elderly pontiff and hailed his humility.

Those who know Jesus will know that Jesus would do the same.
Jesus is now God.
There is nothing wrong with Pope Francis’s action.
Those who criticise or condemn him do not have Jesus in their heart. Amen. X

This true humility, this man is truly humble😭😓😥. Leaders should learn from him, that to be a leader is to Serve humanity ❤️. This is true Joy

Hats off to POPE Francis for such act.
The biggest relegious leader is doing so, it's n act of Mankind, hope both Sudan leaders ll follow his advice & ll create n atmosphere of peace in Sudan.

​His call for peace came right after long-time president Omar Bashir was removed from power in neighbouring Sudan. On 11 April, the Sudanese military detained him following months of anti-government demonstrations in the country. Military officials subsequently established a military transitional council to govern the country for two years in the run-up to elections. Media later reported that that Sudanese Defence Minister Awad Mohamed Ahmed Ibn Auf had been sworn in as the head of the military council.

This raised debates if the coup could impact the fragile peace in South Sudan, which gained independence from Sudan in 2011 and descended into a violent conflict, stopped only last September. Overthrown president Bashir was a guarantor of the 2018 peace deal.