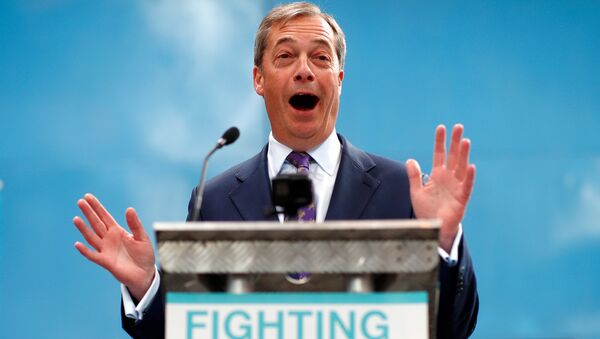 UK prime minister Theresa May's European elections were the party's "first step" in his revolution, but its "first task" was to "change politics", Mr. Farage said.

Brexit party leader Nigel Farage called for a "democratic revolution" in UK politics after launching his new party on Friday in Coventry.

"I said that if I did come back into the political fray it would be no more Mr Nice Guy and I mean it," Mr. Farage told his audience.

The former UKIP leader said that the Brexit party held an "impressive list" of 70 candidates for the upcoming EU elections, including Ms. Annunziata Rees-Mogg, sister of Tory Brexiteer Jacob Rees-Mogg MP, who told Coventry that she had stuck with the Tory party "through thick and thin".

But Ms. Rees-Mogg added: "We've got to rescue our democracy, we have got to show that the people of this country have a say in how we are run."

The party's launch comes amid Prime Minister Theresa May's agreement to delay the UK's withdrawal from the European Union until 31 October.

But the UK can still leave the EU before then if Commons approves a withdrawal agreement, increasing the chance that the UK will hold European Parliament elections on 23 May.

"This party is not here just to fight the European elections… this party is not just to express our anger — 23 May is the first step of the Brexit Party," Mr. Farage said in his speech. "We will change politics for good."

He added that he was "angry, but this is not a negative emotion, this is a positive emotion".

Farage said that the UK had been known as the "the mother of parliaments" respected by the international community, but was losing its reputation.

"But our leaders are happy to continue down the path of managed decline," Mr. Farage said. "I genuinely believe [that] we are lions being led by donkeys".

"Not only are our leaders weak, not only have they betrayed this result, but they're also pretty much incompetent. They're not very good at what they do and they're not good at anything".

"Too many of them have been down the path of going straight from Oxford, to become a researcher, to become a member of parliament in their late-20s," Mr. Farage said. "They've got no experience of the real world."

He slammed traditional leaders as "career politicians", stating that they were not politicians out of "passion" or "cause".

"You would understand why many career politicians would embrace the European project," Mr. Farage said. "It's a wonderful safety net for anyone that fails in national politics."

Mr. Farage added that the Brexit party had received £750,000 in donations in 10 days from donors pledging small donations up to £500, adding that he had "been to the bookmakers", wagering £1,000 on Friday morning to "top the polls in the European elections at the odds of 3 to one".

But UKIP leader Gerard Batten slammed Farage's party as a group of "self-serving hypocrites", stating that his party was a "vehicle" for the former UKIP leader. "It is not a [real] political party," Mr. Batten said. "It's only purpose is to re-elect him. His party is a Tory/ Establishment safety valve."