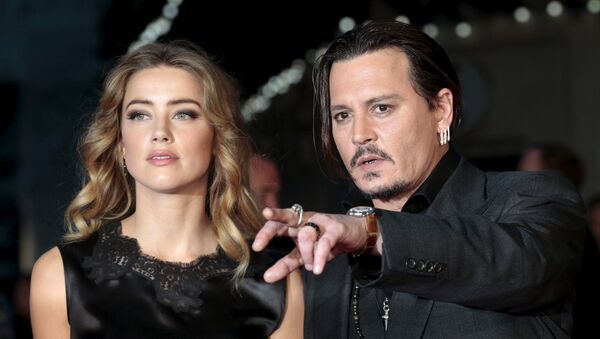 Heard is alleging that Depp's temper was aggravated by his drug and alcohol intake, and that he abused her on multiple occasions.

Paradis Rediscovered: Johnny Depp's Ex Ties Knott as France Beats Argentina
The Telegraph reported incoherent text messages allegedly sent by Depp to his then-wife, presumably while he was under the influence of alcohol.

"I wish I were able to bring even just a glimmer of a smile to the pretty face of my most gorgeous of dreams and darkest nightmares," Depp appeared to text. "I love you far too much for you and I to be these heinous slingling insults like we do/did."

"It is not anything that I am particularly proud of to have participated in… And, I regret giving it life," he allegedly said.

​On another occasion, when Depp allegedly pulled out "large chunks of [Heard's] hair and scalp," the actress recalled how her then-husband had "slapped me hard, grabbed me by my hair, and dragged me from a stairwell to the office to the living room to the kitchen to the bedroom and then to the guest room."

​In a statement to entertainment magazine People, Depp's lawyer rejected the latest claims made by Heard, calling them a "hoax."

"Yesterday's filing, made by a woman with a prior arrest and incarceration for domestic abuse, presented Amber Heard's new lies," the lawyer said, referring to Heard's 2009 arrest for alleged domestic violence against then-girlfriend Tasya van Ree.

In a 2016 deposition video, Heard is seen answering questions from Depp's lawyers, alleging she prevented Depp and his violent temper from physically hurting her sister during a confrontation.

"I would've done what anybody who has a child or a sister would've done," she said. "I acted defensively in her life. I saw her standing on top of a flight of stairs, and trying to interrupt a fight in between him and I."

Depp and Heard married in February 2015, and their divorce was finalized in January 2017. Following the divorce, both actors signed non-disclosure agreements barring them from discussing their relationship publicly.

Depp's lawyers filed a $50 million defamation lawsuit in March against Heard after she authored a Washington Post op-ed in which she spoke on abuse and the retaliation faced by women who speak out against domestic violence. Although the December 2018 piece did not name Depp, his lawyers have stated that Heard was clearly referring to him.

000000
Popular comments
New details all from the tall Russian with tall tales.