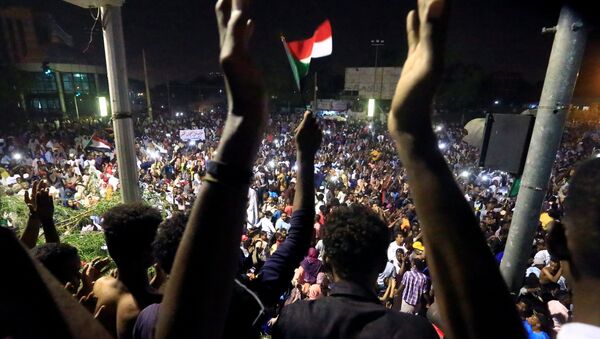 Thousands of Sudanese have been protesting against the government of President Omar al-Bashir in the capital Khartoum since December, prompting him to dissolve the cabinet and declare a year-long state of national emergency. Protests reached a climax on 11 April, with the army reportedly staging a coup.

Following months of protests, the Sudanese Armed Forces have decided to remove the country’s long-time president, Omar al-Bashir, from all posts and dismiss the government, Arabic-language media reported.

In light of the alleged military coup, here are some key facts about al-Bashir, who’s been governing Sudan for 30 years.

Al-Bashir, who was born into a farmer family in 1944 in northern Sudan, which used to be a part of the Kingdom of Egypt and Sudan, enrolled in a military academy in Egypt in 1960. He also graduated from another military academy in Khartoum in 1966 after his family moved to Sudan. He rose through the ranks quickly and even took part in the 1973 Yom Kippur War against Israel, serving in the Egyptian Army.

Being a brigadier in the Sudanese Army, al-Bashir was responsible for waging operations in the south of the country against the late rebel John Garang, who led the Sudan People’s Liberation Army during the Second Sudanese Civil War.

Russia
Russia to Maintain Ties With Sudan Whoever Comes to Power in Khartoum - Lawmaker
As the civilian government of Prime Minister Sadiq al-Mahdi kicked off negotiations with rebels in 1989, al-Bashir led a group of officers in a military coup that resulted in the ouster of the al-Mahdi government.

After dissolving the military junta in 1993 which had brought him to the helm in the first place, al-Bashir appointed himself the civilian head of state and has since been repeatedly elected president.

As reports of a military coup in Sudan flood in, it appears that this is not the first time that the Sudanese Armed Forces have attempted to topple al-Bashir. Several months after he ascended to power in 1989, a group of officers tried to overthrow his government, in April 1990, but the coup was quickly foiled.

In 2005, al-Bashir’s government managed to put an end to the Second Sudanese Civil War, which broke out in 1983 between the central government in Khartoum and the Sudan People’s Liberation Army. He negotiated a peace agreement, which eventually saw Southern Sudan separate from Sudan following a 2011 independence referendum.

In 2009, the International Criminal Court (ICC) accused al-Bashir of carrying out war crimes and crimes against humanity in the western region of Darfur – a 2003 armed conflict that resulted in the deaths of hundreds of thousands of civilians – and issued an arrest warrant against him.

The warrant was, however, condemned by the Arab League and the African Union, with a number of countries refusing to detain the president and hand him over to the ICC during his international trips.

Al-Bashir, who became the first sitting head of state to be indicted by the ICC, has himself rejected the charges, saying that “these things are lies”.