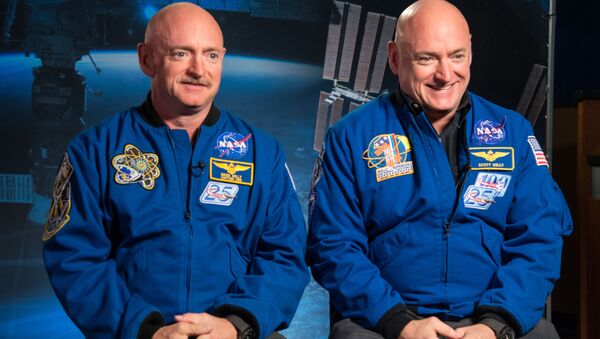 WASHINGTON (Sputnik) - Results of from a comparison of genetic changes in an astronaut who spent nearly a year in space and an identical twin brother who remained in Earth have demonstrated that chromosomes changed in space returned to normal on Earth, with limited permanent changes in gene expression, NASA announced in a press release on Thursday.

"The Twins Study provides the first integrated biomolecular view into how the human body responds to the spaceflight environment, and serves as a genomic stepping stone to better understand how to maintain crew health during human expeditions to the moon and Mars", the release stated.

In 2014 and 2015, NASA astronauts Scott Kelly spent 340 days in space while his identical twin brother, Mark, remained earthbound, so scientists could examine the impact of extended space flight at the cellular and molecular level, the release said.

Science & Tech
Project Blue: Scientists Aim to Build Space Telescope to Find Earth's 'Twins'
"The telomeres in Scott’s white blood cells, which are biomarkers of aging at the end of chromosomes, were unexpectedly longer in space then shorter after his return to Earth with average telomere length returning to normal six months later", the release said.

In contrast, his brother’s telomeres remained stable throughout the entire period, the release added. While in space, researchers observed also changes in the expression of Scott’s genes, with the majority returning to normal after six months on Earth.

After 27 months of collecting data, the results are in! 🤓 Discover what we learned about the impacts of spaceflight by comparing the DNA of identical twins as one astronaut spent 340 days aboard the @Space_Station while the other remained on Earth: https://t.co/BKEoyfYlpc pic.twitter.com/ecOaWgqPXA

However, a small percentage of genes related to the immune system and DNA repair did not return to baseline after his return to Earth, enabling NASA to identify genes to target when monitoring the health of future astronauts during lengthy missions. Scott’s immune reaction to a flu shot given in space was identical to his brother, who was vaccinated on Earth, according to NASA.

NASA plans to eventually establish bases for humans to live and work on the moon and Mars.