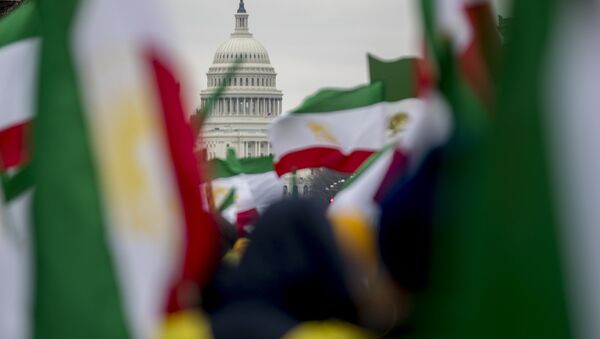 Lawmakers believe any military action against Tehran must be authorized by Congress. It is unclear whether the Trump administration agrees.

US senators warned State Secretary Mike Pompeo on Wednesday that the White House has no authority to declare war on anyone — including Iran — since, according to the US Constitution, this power belongs to Congress.

Talking to Pompeo during a Senate Foreign Relations Committee hearing Wednesday, Senator Rand Paul (R-KY) asked Pompeo if the 2001 Authorization for Use of Military Force, issued to allow US troops to fight with entities responsible for the 9/11 attacks and their associated forces, included Iran.

Pompeo dodged the question in his trademark manner, addressing the formalities to the lawyers, but claimed he has no doubt that "there's a connection" between the Iranian government and al-Qaeda, the terror group that was responsible for 9/11.

"The factual question with respect to Iran's connections to al-Qaeda is very real. They have hosted al-Qaeda. They have permitted al-Qaeda to transit their country," he said.

"There is no doubt there is a connection between the Islamic Republic of Iran and al-Qaeda. Period, full stop," he added.

US Slaps Britain-Based Bank With $1.1bn Fine Over Alleged Iran Sanctions Breach
The lawmakers were not satisfied with Pompeo's allegations.

"You do not have the permission of Congress to go to war with Iran," Paul responded, chiding Pompeo for avoiding the question. "Only Congress can declare war."

Under the 1973 War Powers Resolution, the US president can authorize military action, notifying Congress 48 hours in advance, if military forces remain abroad for no more than 60 days, with a following 30-day withdrawal period. A military action lasting longer than 60 days must be authorized by Congress.

Pompeo's Wednesday hearing was officially connected to US President Donald Trump's proposal to reduce the State Department's $700 billion budget by about one-fourth. The proposal, however, was almost unanimously rejected by both parties in Congress, and lawmakers instead focused on other aspects of the administration's foreign policy.

Earlier this week, Trump declared the Islamic Revolutionary Guards Corps (IRGC), Tehran's elite armed forces branch, a terror group, making it the first time that an official foreign military body has been classified as an illegal criminal organization. The designation comes months after the US Treasury Department imposed sanctions on the military organization in October 2017.

Trump Holds 'Productive' Call With Saudi Crown Prince on Pressuring Iran - WH
Trump said in a Monday statement that the designation was an "unprecedented step" that "recognizes the reality that Iran is not only a State Sponsor of Terrorism, but that the IRGC actively participates in, finances, and promotes terrorism as a tool of statecraft."

According to the text of the 2001 Authorization for Use of Military Force Against Terrorists, "the [US] President is authorized to use all necessary and appropriate force against those nations, organizations, or persons he determines planned, authorized, committed, or aided the terrorist attacks that occurred on September 11, 2001, or harbored such organizations or persons, in order to prevent any future acts of international terrorism against the United States by such nations, organizations or persons."

In response to Trump's designation, Iran declared the US military's Central Command and all linked forces a terrorist group as well.

"As a retaliatory measure to the US illegal decision [to recognize the IRGC as a terrorist organization], Iran declares the US regime a 'state that supports terrorism' and the CENTCOM and forces that are linked to it a 'terrorist group'," Iran's Supreme Security Council said in a statement.

Washington Hopes EU Could Match US Designations on Iran - Senior Official
Israeli Prime Minister Benjamin Netanyahu, who at the time was facing an imminent Knesset election, thanked Trump for designating the IRGC as terrorist group upon his "request."

"Thank you for accepting another important request of mine, which serves the interests of our countries and countries in the region," the prime minister said in a tweet Monday. "We will continue to take action in various means against the Iranian regime, which threatens the State of Israel, the US and world peace."