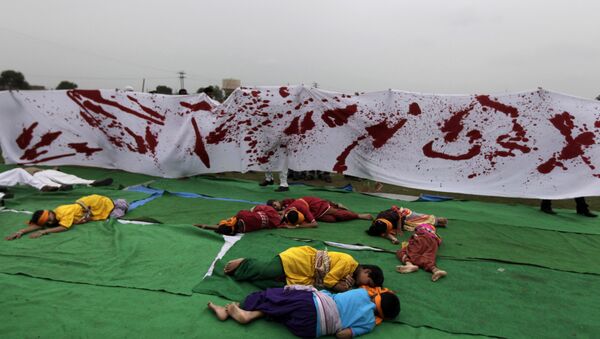 © AP Photo / Altaf Qadri
Subscribe
The massacre, which took place in Amritsar in the Indian state of Punjab during British governance, resulted in the death of hundreds of protesters due to indiscriminate firing. Pakistan and Bangladesh, being part of the erstwhile united India before Partition in 1947, view the incident with disdain.

New Delhi (Sputnik): Two days ahead of the 100th anniversary, Pakistan's Information Minister Fawad Chaudhry endorsed a demand that the British government must apologise to India, Pakistan, and Bangladesh for the Jallianwala Bagh massacre and for the famine in Bengal.

"Fully endorse the demand that [the] British Empire must apologise to the nations of Pakistan, India, and Bangladesh on Jallianwala Massacre and Bengal famine. These tragedies are the scar on the face of Britain", he tweeted.

Fully endorse the demand that British empire must apologise to the nations of Pakistan, India and Bangladesh on Jallianwala Massacre and Bengal famine.. these tragedies are the scar on the face of Britain, also KohENoor must be returned to Lahore museum where it belongs

India Observes Centenary of Barbaric Massacre by British Colonial Regime
The statement comes a day after British Prime Minister Theresa May expressed regret for the Jallianwala Massacre, but stopped short of a full apology.

"The tragedy of Jallianwala Bagh in 1919 is a shameful scar on British-Indian history. We deeply regret what happened and the suffering it caused", May told the British Parliament on Wednesday. Jeremy Corbyn, leader of the main opposition Labour Party, called for a full, clear, and unequivocal apology.

Apologising for massacre, genocide, pogrom by any leadership is a sign of strength and statesmanship.
UK PM @theresa_may calls #JallianwalaBaghMassacre in 1919 a "shameful scar" on British Indian History and expresses "regret" but stops short of saying SORRY. pic.twitter.com/b2PQOrUwGl

"As Her Majesty, the Queen (Elizabeth II) said before visiting Jallianwala Bagh in 1997, it is a distressing example of our past history with India", May added.

Jallianwala Bagh is located in Amritsar in India where on 13 April 1919, British troops under the command of Colonel Reginald Dyer fired indiscriminately on hundreds of unarmed pro-independence protesters, killing over a thousand. A memorial ceremony will take place at site of the massacre on Saturday.

The Pakistani minister also sought a British apology over the Bengal famine, in which some four million Bengalis starved to death in 1943. Then British Prime Minister Winston Churchill ordered the diversion of food from starving Indian civilians to well-supplied British soldiers and to top up European stockpiles in Greece and elsewhere.

British authorities have yet to respond to Islamabad's call.

In addition to this, a vocal Indian parliamentarian, Shashi Tharoor, who once worked as a UN official, has been asking for a British apology over the incident for the last four years.

1/2 Theresa May’s expression of regret for the British massacre of Indians at #JallianwalaBagh is a welcome first step. As someone who has long sought an apology from London for its colonial atrocities, I am glad her statement at least addresses the issue. But it is not enough. https://t.co/JOTX8dwicx