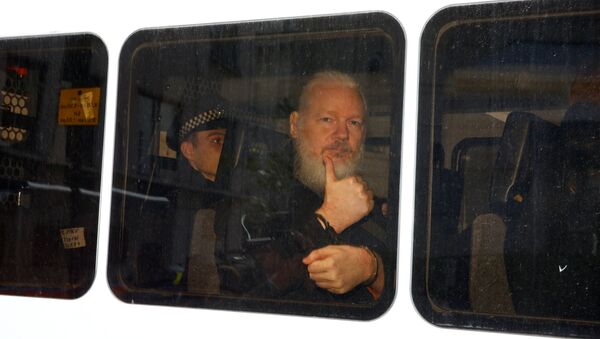 The arrested WikiLeaks chief has been snapped posing in handcuffs on Thursday, 11 April 2019 as he was being delivered to Westminster Magistrates' Court in London.

Following his detainment by UK authorities, the police confirmed that it had been made "on behalf of the United States authorities." Ecuador had withdrawn asylum it had earlier granted to Assange, as well revoking his citizenship.

Earlier in the day, an agitated, frail-looking Assange with white hair and a white beard was dragged out of the Ecuadorian embassy to a waiting police van. The WikiLeaks founder has been staying at the embassy for almost 7 years, following his asylum grant by Ecuador in 2012.

Speaking at Westminster on 11 April, the UK Prime Minister welcomed the news of Assange's arrest, adding that it was "now a legal matter before the courts."