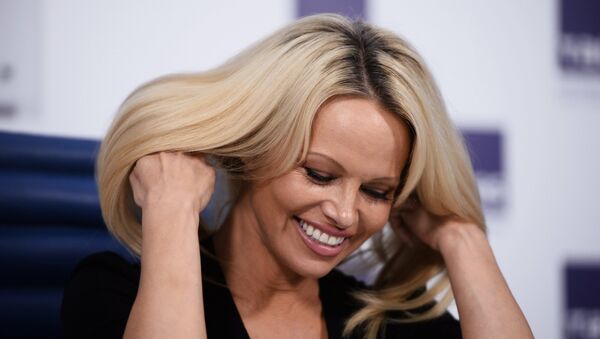 The Playboy model-turned activist publicly endorsed the WikiLeaks founder while he was residing in the Ecuadorian Embassy in London and even visited him there. She has not remained on the sidelines regarding the recent dramatic turn posting a fierce rant on Twitter.

US actress Pamela Anderson expressed her shock and devastation over the arrest of Julian Assange with a series of emotional tweets. Besides posting a call to donate and RT’s video of the officials, dragging the WikiLeaks founder down the stairs, she also branded the UK “America’s bitch” that needs a diversion from “idiotic Brexit bull***t” as well as the US with its “toxic coward of a President".

I am in shock..
I couldn’t hear clearly what he said?
He looks very bad.
How could you Equador?
(Because he exposed you).
How could you UK.?
Of course — you are America’s bitch and
you need a diversion from your idiotic Brexit bullshit.

And the USA?
This toxic coward of a President
He needs to rally his base?—
You are selfish and cruel.
You have taken the entire world backwards.

You are devils and liars and thieves.
And you will ROTT

And
WE WILL RISE ✊

​Judging by her Twitter feed, the former Playboy girl and one of the 90s’ most recognisable sex symbols has closely watched the story of the Australian whistleblower, who has been hiding for years from the US after publishing leaked classified documents and exposing American atrocities in Iraq and Afghanistan. She has stood up for Julian Assange ever since the Ecuadorian authorities introduced a protocol restricting Assange's communications.

Among other things, the Baywatch star has re-tweeted the updates on Assange’s case from WikiLeaks on a regular basis, shared an image featuring them both, stressing how heartbreaking it's been to not be able to spend time with him and recently posted his portrait with a caption in Latin that can be translated as “truth prevails”.

​Before Assange was banned from receiving visitors, Anderson dropped by the Ecuadorian Embassy in London, where the WikiLeaks founder has been residing since 2012, and spilled some beans about their close connection. She asserted that she and Julian Assange “are very close” and that he “trusts her".

Assange had been living inside the embassy in London for 7 years until this very morning, when he was arrested by British police. They have confirmed that the arrest of Julian Assange comes in relation to an extradition warrant from the US authorities. WikiLeaks Twitter stated that his detention under the US extradition request comes in light of the case about "conspiracy with Chelsea Manning" to publish Iraq War logs, State Department cables, and Afghan War logs.