Likud’s Appeal to Right Wing Has Once Again Paid Off 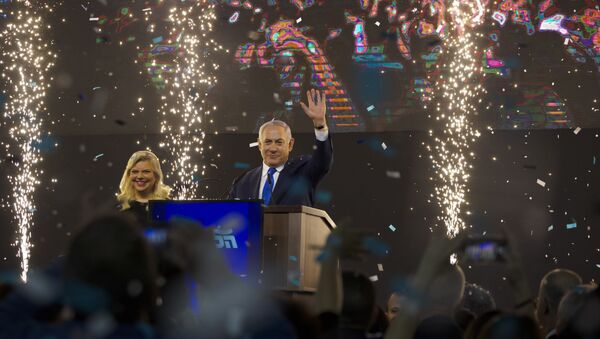 © AP Photo / Ariel Schalit
Subscribe
With Israeli Prime Minister Benjamin Netanyahu on track to retain his office, the scramble is on to form a ruling coalition government. While his Likud Party advanced in seats, news has emerged that it sponsored successful voter intimidation tactics in Arab communities.

Sputnik News analyst and producer Nicole Roussell, who's been on the ground as the elections unfold, spoke with Radio Sputnik's Loud and Clear from Jerusalem Wednesday.

​Roussell noted that in assembling his coalition, Netanyahu has already secured the support of many of the far-right parties in the Knesset, both for a Likud-led coalition and for his prime ministership specifically.

However, some of the most infamous far-right figures, such as Naftali Bennett and Ayelet Shaked of the New Right, failed to make the minimum number of votes of 3.25 percent, and thus won't be sitting in Israel's 21st Knesset.

Sputnik has reported that Likud hired a PR firm to place 1,200 hidden body cameras on people working at polling stations in Arab neighborhoods. The company, Kaizler Inbar, boasted on its Facebook page Wednesday it had "managed to lower the voter turnout to under 50 percent, the lowest in recent years!"

Roussell told host Brian Becker Wednesday that the chairman of Israel's Central Elections Committee, Supreme Court Justice Hanan Melcer, had not been informed by Likud about the cameras and that complaints that "were not baseless" had been made about Likud members harassing people at polling stations about how they voted.

"So we have an actual mechanism of the Israeli state kind of acknowledging that these complaints are frequent, and they are not baseless; they are real complaints that happen against the Likud Party doing this intimidation," Roussell said.

Becker recalled Netanyahu's 2015 campaign ad stating "Arab voters are heading to the polls in droves," which he noted was intended to whip up voter participation for Likud, but which was also clearly a race-based appeal against a minority population.

Roussell noted Netanyahu didn't change his game much this year, with Netanyahu telling voters to "‘go out and vote for the right wing because if you don't, Benny Gantz is gonna team up with the Arab parties and form a coalition with them.' He obviously thought that was going to be successful in getting people to go vote for Likud, and Likud got 35 seats. So even though this was outright racism against Arabs — that was something that worked."

Roussell spoke with Gilad Erdan, a Likud MK and the Israeli minister of public security, strategic affairs and information, during a press conference at Likud Party headquarters, who said his party's appeal to the right wing had repeatedly paid off.

"We will be the ones that have the options to build the next government… the best chance to create a government is to the Likud," Erdan said. "We gave a commitment to the Israeli public that our first option will be to try to put together a right-wing coalition, like what we had in the current Knesset… This is my sixth or seventh election, and all the time, we get better results from the polls… our strategy proved itself."

Erdan suggested the alternative to a right-wing alliance, which he said Gantz must face, was to negotiate with the Arab parties — something he regarded as unpalatable.

Roussell also spoke with Yoav Kish, another Likud MK, who said voters had backed Likud instead of Blue and White because Likud stands for a one-state solution. "We're not going to risk our security on such a dangerous move," he said.

However, while Kish said that annexation of Area C in the West Bank was "a challenge for our next term in the Knesset," he rejected the term "annexation," saying he preferred "apply sovereignty," since "that used to be our territory, and it was never someone else's."

Kish said Likud placed cameras at "Arab Israeli" community polling stations — he rejected the name "Palestinian" when Roussell asked the question — "to avoid harmful use or faking of voters and stuff like this. I think it was approved to have it."

000000
Popular comments
"our strategy proved itself" Until it doesn't :)