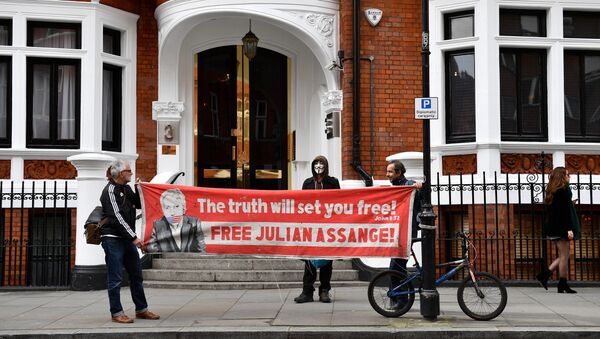 Julian Assange has been locked up in Ecuador's embassy in London for almost seven years now, but it was reported that the Wikileaks founder would soon be expelled from the building.

WikiLeaks announced on Wednesday that it had uncovered an "extensive spying operation" against whistleblower Julian Assange within the Ecuadorian embassy in London.

Julian Assange, the founder of the WikiLeaks whistleblowing website, is being spied on inside the embassy, where he has been residing for the last several years, said the website's Editor-in-Chief Kristinn Hrafnsson.

He assumed that Assange's "every move" inside the building, as well as meetings with visitors, are being monitored via security cameras.

"We know that there was a request to hand over visitor's logs from the embassy and video recordings from within the security cameras in the embassy," Hrafnsson said, claiming that the information had been handed over to the Trump administration.

He went on to claim that Assange's conditions of stay have worsened since President Lenin Moreno took office in May 2017 and accused the Ecuadorian head of state of "invasion of privacy".

Hrafnsson added that Assange's "eviction" from the embassy and the subsequent arrest are "imminent".

"The only reason why this was averted, in or opinion, is the fact that we learned about it and we were able to publish that information. That was the only reason why it was stopped — probably, temporarily," he said.

"The alleged secret spying on Assange is, if true, a clear violation of his right to privacy," human rights campaigner Peter Tatchell told Sputnik. "It is further evidence of the sustained intrusion and harassment that he has been suffering. We do not yet know for sure if or when Ecuador plans to expel Asssnge from the embassy."

"But such a move now seems likely, according to signals from Quito. Since Lenin Moreno was elected president, the pressure on Assange has escalated. Ejecting him from the embassy would be a clear violation of his Ecuadorean citizenship and asylum rights. It would put him at risk of extradition to the US, where he would very likely face charges that could see him jailed for 30 or more years. Assange published evidence of American war crimes. He's a hero, not a criminal."

On Monday, WikiLeaks circulated a video showing journalist Cassandra Fairbanks walk up to two people sitting in a purported "undercover" car outside the Ecuadorian embassy. She alleged that those "stalkers" were taking shifts while waiting for Assange to walk out of the building, apparently in a bid to catch him.

She then reported that the car had moved to directly across from the embassy, but there were different passengers there.

Last week, WikiLeaks announced, citing a source in Ecuador's government, that Assange could be expelled from the embassy within "hours to days" and that Quito had already agreed with London on his arrest.

Also last week, Ecuadorian President Lenin Moreno accused Assange of violating the conditions of his stay in the embassy. Specifically, he insisted that Assange shouldn't meddle in the politics of other states, especially Ecuador's partners.

The Australian-born journalist sought political asylum in Ecuador's embassy in London in June 2012. At that time, he was wanted by Swedish prosecutors for questioning over sexual assault allegations, which he dismissed as politically motivated. The accusations surfaced shortly after WikiLeaks released a massive trove classified and sensitive documents about the US-led wars in Afghanistan and Iraq. These information dumps have provoked a Washington investigation into WikiLeaks and Assange personally, with the US seeking to prosecute the journalist under the Espionage Act.