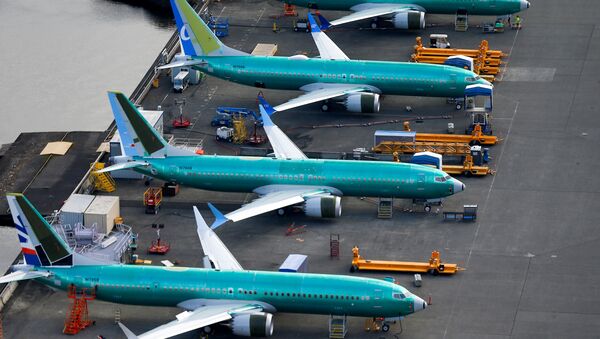 WASHINGTON (Sputnik) - A Boeing shareholder has filed a class-action lawsuit against the US aircraft manufacturer over an alleged cover-up of safety issues related to the 737 MAX airplanes, media reported on Wednesday.

The lawsuit, filed on Tuesday by Boeing shareholder Richard Seeks, claims that the company put "profitability and growth ahead of airplane safety and honesty", the Washington Post reported, citing court documents.

The suit seeks damages for alleged securities fraud violations, claiming investors suffered economic losses as a result of Boeing's failure to disclose the plane's safety issues, according to the report.

Boeing's market value took a tumble following the crash of a 737 MAX plane — operated by Ethiopian Airlines — on 10 March in which all the 157 people on board died.

Boeing to Establish Panel to Review Planes Design in Light of 737 MAX Crashes
The incident was the second involving a 737 MAX within a five-month period. On 29 October 2018, Lion Air Flight 610 crashed off the coast of Indonesia, killing all 189 passengers and crew members.

Last week, company CEO Dennis Muilenberg announced that Boeing will temporarily reduce the production rate of its 737 MAX airplanes by almost 20 percent to focus on delivering a promised software fix that will eliminate the possibility of an unintended action by the Maneuvering Characteristics Augmentation System (MCAS).

Preliminary investigations have identified MCAS as the possible cause of both accidents.