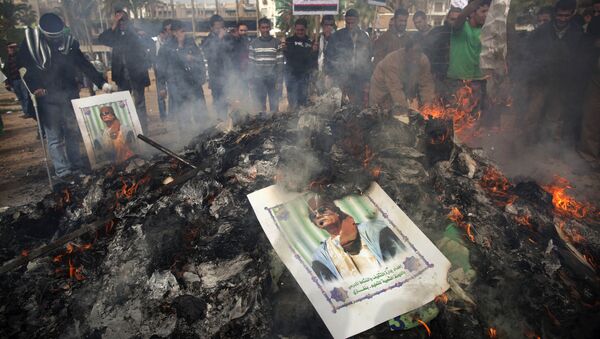 Instead of criticising Field Marshal Khalifa Haftar, the Trump administration should encourage the political consensus between warring parties in Libya, as the US bears a great deal of responsibility for the ongoing crisis in the country, Dr. Mohammed Issam Laaroussi, professor of international relations, told Sputnik.

The Libyan National Army (LNA), led by Field Marshal Khalifa Belqasim Haftar, has come under heavy criticism from Washington over the recent advance on Tripoli, home to the UN-recognised Government of National Accord (GNA).

"We have made clear that we oppose the military offensive by Khalifa Haftar's forces and urge the immediate halt to these military operations against the Libyan capital", Secretary of State Mike Pompeo said in an official statement on 7 April.

Dr. Mohammed Issam Laaroussi, professor of international relations and a senior research fellow at Abu Dhabi-based TRENDS Research and Advisory, opined that Washington's rant against Haftar are very confusing and have little if any credibility.

"This US contradictory decision, criticising Haftar's escalation, is very confused and not credible", he said.

Haftar Army Launches New Strikes on Tripoli International Airport - Reports
He noted that "Britain, France, and Italy put out a joint statement that did not even blame the general for the escalation," but "merely urged all parties to restore calm".

The academic insisted that Washington bore a great deal of responsibility for the political crisis in the North African state.

"After the collapse of the [Muammar] Gaddafi regime, Washington has influenced, excessively, along with other regional actors, the Libyan crisis in terms of spreading the chaos in the North African region, admitting the proxy war game in this very sensitive region," the professor emphasised.

The Libyan crisis spun out of control in 2011 after a NATO coalition headed by France, the UK, and the US bombed the positions of the government forces in the country and facilitated the ouster of Libyan leader Muammar Gaddafi. As a result, the country was dragged into a prolonged civil war.

Dr. Laaroussi highlighted that the Libyan crisis was triggered by flawed NATO actions in 2011. He recalled that the UN Security Council Resolution of 1973, which was adopted on 17 March 2011, had "authorised the use of all necessary measures to protect Libyan civilians and civilian-populated areas."

According to the professor, the document "confirm[ed] the intention of the United States to seek an international mandate for the use of force and show[ed] the Council's willingness to apply the doctrine of the responsibility to protect".

EU Parl't Head Reminds France About Role in Gaddafi's Overthrow Amid Libya Chaos
Thus, a NATO-led alliance was authorised to carry out air strikes against the government military targets that reportedly posed a lethal threat to the country's civilians.

However, in September 2016, the British House of Commons Foreign Affairs Committee produced a report on the NATO intervention in Libya in 2011, concluding that "the immediate threat to civilians" which became the trigger for the aerial campaign "was publicly overstated".

The report underscored that the UN mandate "neither explicitly authorised the deployment of ground forces nor addressed the questions of regime change and of post-conflict reconstruction".

The analysis highlighted that "the United States was instrumental in extending the terms of Resolution 1973 beyond the imposition of a no-fly zone to include the authorisation of 'all necessary measures' to protect civilians" explaining that in practice this "led to the imposition of a ‘no-drive zone' and the assumed authority to attack the entire Libyan Government command and communications network".

Secret Report Reveals How NATO War Against Gaddafi Could Have Started in Mid-80s
"The significance of the US move to [gain] international legitimacy should not be exaggerated", the academic pointed out. "Moreover, the intervention developments in Libya have done more to discredit the concept of the 'responsibility to protect' than any criticism from an international law perspective possibly could. Libya has become a [failed] state and a ‘black hole' for terrorists, arms trafficking and illegal migrant flows".

Given this, it is hardly surprising that "Russia and China are no longer willing to grant NATO states a mandate for action", the professor added.

Dr. Laaroussi believes that instead of lecturing Haftar, the US should "encourage the political consensus between the Libya's recognised government, presided over by Faiz Serraj and the other parties to the struggle".

"I think that the upcoming conference and António Guterres' peace-making work are the last chance for a peaceful arrangement in Libya. If it fails, Libya`s crisis would have only two possible options: prolonged stalemate or conflict," he concluded.

LNA Operation in Tripoli to Not Affect Plans to Hold Elections in Libya - Gov't
On 4 April, Field Marshal Khalifa Belqasim Haftar announced that he was launching a military offensive on Tripoli, aimed at "liberating the region from terrorists".

The Libyan capital became the base for the UN-recognised GNA in 2015. However, the body's legitimacy was not recognised by a number of regional players, including Haftar. As a result, the country was de facto divided into two parts with no unified government at the helm.

The Tripoli-based GNA has scrambled to mobilise its forces in response to Haftar's 4 April offensive. Meanwhile, US troops withdrew from the capital, leaving the GNA on its own.

Haftar's forces have been gaining ground since 2017. Having taken large parts of the country, including Benghazi, the LNA maintained control over the oil fields in the southwest of the country in 2018.

Speaking to Sputnik on 8 April, the Bayda-based Interim Government's foreign minister in eastern Libya Abdel Hadi Khweish highlighted that Haftar's offensive would not affect plans to hold democratic elections in the country. "The elections will take place and we insist on respect for the political process based on democratic principles", Khweish asserted.