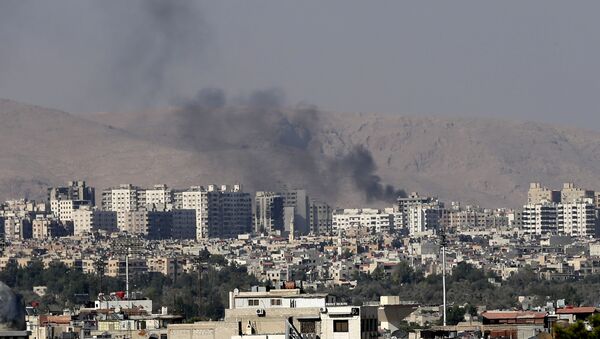 MOSCOW (Sputnik) - Militants have breached truce regime in Syrian provinces of Hama, Idlib and Latakia over the past 24 hours, head of the Russian Defence Ministry's Centre for Syrian Reconciliation Maj. Gen. Viktor Kupchishin said on Wednesday.

"During the day, militants have attacked Safsafa in Latakia province, Tall-el-Maqtal in Idlib province, Hamdaniya in Hama province", Kupchishin said at a press briefing.

As of Tuesday, a total of 57,477 people have been granted amnesty by the Syrian authorities over evading military service, the center’s head added.

Paris Denies Involvement of Its Intelligence in Preparing Provocation in Idlib
Russia, alongside Turkey and Iran, is a guarantor of the ceasefire regime in Syria. Moscow has also been assisting Damascus through supporting the struggle against terrorist groups, providing humanitarian aid to local residents and facilitating the return of refugees.

Damascus is gradually regaining control over the crisis-affected country ravaged by the Daesh terrorist group and militants from other fractions as the war in the region has entered its ninth year. During the whole time of the conflict some 5.6 million Syrians fled the country to neighboring states and to Europe.

*Daesh (ISIL/ISIS/IS/Islamic State) is a terrorist organisation banned in Russia and many other countries.