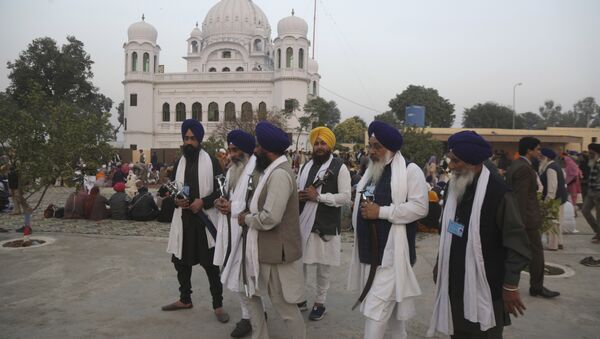 Many Sikh pilgrims from India visit Pakistan for religious festivals every year under the framework of the India-Pakistan Protocol on Visits to Religious Shrines 1974.

New Delhi (Sputnik): Despite the ongoing hostilities between the two South Asian rivals, Pakistan has issued visas to 2,200 Indian Sikh pilgrims to allow them to participate in annual Baisakhi celebrations from 12 to 21 April. Baisakhi is a Sikh religious festival which also marks Punjabi New Year.

Under the framework of the Indo-Pak Protocol on Visits to Religious Shrines, a large number pilgrims from India and Pakistan make cross-border trips every year.

On 8 April, Pakistan agreed to hold a technical meeting on 16 April between experts from both India and Pakistan for the construction of the Kartarpur Corridor. The Kartarpur Corridor is expected to provide visa-free access to Indian Sikh pilgrims to worship at the Gurdwara (Sikh worship place) in Kartarpur Sahib ahead of the 550th birth anniversary of Guru Nanak which will be celebrated in November this year.

Pakistan has also agreed to release 360 Indian prisoners, mostly fishermen, this month in four phases as a ‘goodwill gesture'. Out of the 360, 100 fishermen were already returned to India on Monday. However, India has yet to reciprocate the Pakistani gesture and has not issued any statement whatsoever on the release of Pakistani prisoners currently held in Indian jails.