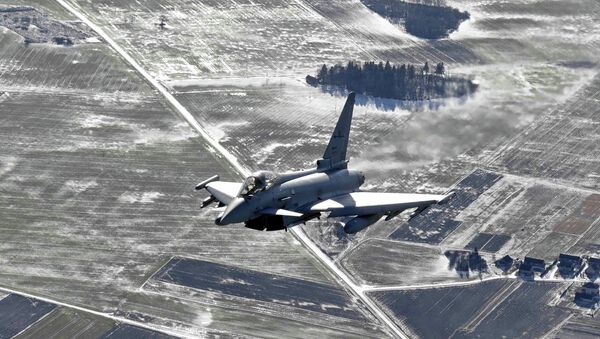 The jets were scrambled after the airliner, bound for Egypt, lost contact with ground control.

The Italian Air Force confirmed Wednesday that it scrambled two Eurofighter Typhoon warplanes to intercept a German Tui Fly Boeing 737 on route to the Egyptian resort city of Hurghada from Frankfurt, with the intercept taking place over the Balkan nation of Montenegro on Tuesday.

The decision to scramble the fighters was reportedly made by the Combined Air Operations Centre in Torrejon, Spain, with the planes flying out from the Gioia del Colle airbase in southeastern Italy.

Montenegro Protesters Demand President's Departure, Creation of Civil Unity Govt
The jets returned to base after radio communications were restored.

The incident was reportedly the first of its kind over Montenegrin airspace since the beginning of the alliance air policing mission in June 2018. Montenegro does not have its own air force, and the Italian, Greek and Hungarian militaries have promised assistance in ensuring the security of its airspace.

The Balkan nation controversially joined the alliance in 2017, without a national referendum on the subject, despite opinion polling indicating that the majority of Montenegrins were opposed to alliance membership. Montenegro was targeted in NATO's 1999 bombing campaign against Yugoslavia, which left as many as 5,700 civilians dead and contaminated part of the region with depleted uranium, leading to a spike in cancer rates.