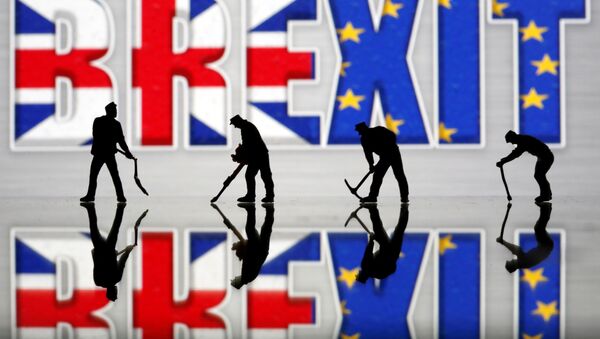 © REUTERS / Dado Ruvic/Illustration
Subscribe
European Union leaders agreed Wednesday to delay Brexit until October 31, 2019, so that the UK could "find the best possible solution." A review of the matter is to take place in June.

European Council President Donald Tusk tweeted that an agreement on an extension had been reached late Wednesday night. According to the Guardian, EU sources have confirmed that there will be an Article 50 extension to October 31, and that the review will focus on whether there should be an earlier exit on June 30.

Irish Prime Minister Leo Varadkar has stated in response that the UK must participate in upcoming EU parliamentary elections or face leaving the block on June 1.

​EU leaders arrived in Brussels earlier in the day to decide whether to grant the UK a second extension to its departure from the bloc. The UK was granted its first extension in late March, giving the country until April 12.

The UK was meant to leave the EU on March 29; however, May opted to request an extension a week prior as she did not have the support from British lawmakers for the deal she'd previously negotiated.

Conversations between May's government and the opposition Labour Party are presently not close to breaking the Brexit deadlock, according to John McDonnell, a Labour Party politician.

"There is the potential of a deal, but so far, we've still got some fundamental disagreements about the nature of our future relationship with Europe," he told ITV's Peston program. British lawmakers have already rejected May's deal three times.

EU parliamentary elections, which are set to take place on May 23 to May 26, could force the UK to elect representatives to the EU assembly, if British lawmakers fail to ratify a withdrawal agreement.