Canada to Tighten Laws Against Migrants Rejected by US, Other Countries 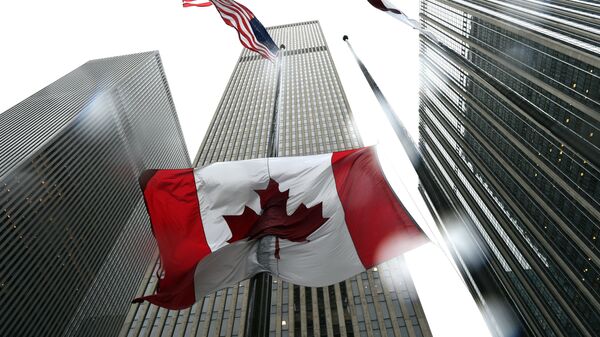 © AFP 2023 / Timothy A. Clary
Subscribe
International
India
Africa
The measure is proposed in response to a surge of illegal immigration following adoption of US President Trump’s hard anti-immigration policies.

Canadian Parliament is discussing tightening its immigration legislation to make it harder for migrants rejected by other countries to apply for refugee status at its border, The Hill reported Tuesday.

Strangely enough, the proposed amendments that will change the national immigration policy are included as mere clauses in the government's budget bill.

"I expect this to be a major change for Canada's refugee system and I'm surprised to see it buried in a budget bill," lawyer Kevin Wiener said in an interview to BBC.

Canada Needs to Develop More Rules to Control its Spying Operations – Watchdog
According to the proposed amendments, border agents will be bestowed with authority to reject refugee claims from people who have already been turned away from a country that has an immigration information-sharing agreement with Canada, which includes the US, the UK, New Zealand and Australia. Under new regulations, the asylum seeker will have no opportunity to appeal on agent's decision or get an oral hearing regarding their application.

Following the tightening of immigration policy by Trump administration, Canada was faced with a massive illegal immigration spike. In 2018 alone, 20,000 people crossed the US-Canada border, while currently Ottawa has 200,000 pending asylum claims, according to BBC report. Due to Trump's hard stance on immigration, people who initially intended to make an application in the US, opted for travelling all the way up north and cross the border illegally into Canada, Global News reported last year.

In order to tackle the influx of migrants coming across the southern border, Canadian communities near the border had to repurpose community centres and old stadiums to accommodate the migrants waiting for their applications to be processed, which led to rising tensions between border communities and Ottawa. Canadian government reportedly vowed to spend over $750 million on border services over the next five years, The Hill reports.