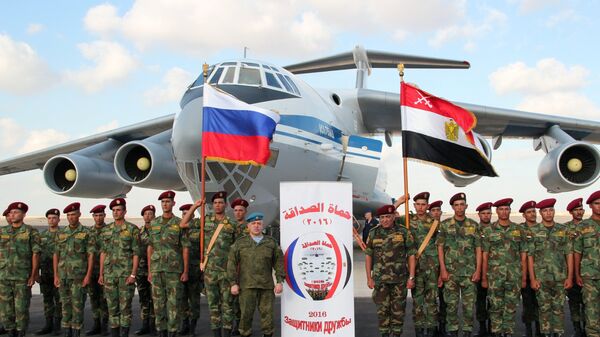 WASHINGTON (Sputnik) - The United States encourages Egypt to turn more toward the West and away from Russia ahead of Egyptian President Abdel Fattah Al Sisi's upcoming visit to Washington, DC, a senior Trump administration official said in a press briefing.

“In terms of the expanding Russian influence in the region, that's obviously something which we are quite concerned. We don't see a lot of material benefits to engagements with the Russians”, the official said on Monday. “We just would encourage the Egyptians to turn more toward the West, toward the United States".

READ MORE: Russia, Egypt Did Not Sign Contracts for Aircraft Delivery in Late 2018

“We have long argued that Russia is not a reliable partner for weapons sales; that American equipment and American support is far superior”, the official said.

World
Russia, Egypt Sign Documents on Resumption of Direct Flights After 2-Year Break
Moreover, the United States wants to expand its counterterrorism partnership with Egypt given that terrorism remains a significant threat to that country's stability, a senior administration official said in press briefing.

“Terrorism is a very significant threat to Egypt's stability, from Libya, Sinai and the South, so they are kind of uniquely positioned to be responding to a whole range of threats in that theater. For us, it's a very, very important partnership that we want to expand,” the official said on Monday.

The official noted that Egypt plays an important diplomatic role in negotiating with Hamas, and is working to persuade the Palestinian movement to comply with the conditions that would move them out of being considered a terrorist organization.

In 2017, Fatah and Hamas signed an Egypt-brokered agreement to put Gaza back under the Palestinian National Authority's control, but the deal has not been implemented so far.

Russia is one of mediators in both, the Israeli-conflict and the intra-Palestinian talks. The Trump's administration, meanwhile, has also been working on its peace plan for the Israeli-Palestinian settlement for months.

World
US Decision to Cut Financial Aid to Egypt to Affect Bilateral Ties – Cairo
However, Palestinians have rejected Washington’s involvement in the conflict settlement after Trump recognized Jerusalem as the capital of Israel and moved the US embassy there in May 2018 despite UN recommendations to refrain from establishing diplomatic missions until the city’s legal status is settled.

Recent reports have also suggested that Egypt agreed to purchase Russian Su-35 fighter jets along with corresponding weapons systems worth some $2 billion. On 19 March, Russia's Federal Service for Military-Technical Cooperation told Sputnik that no such contract has been signed.

The meeting between US President Donald Trump and Al Sisi is scheduled for 9 April. The White House said in an earlier statement that the two leaders will focus on military cooperation and counterterrorism during their meeting.