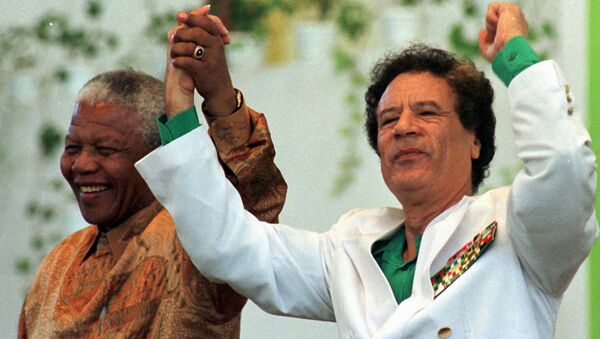 Subscribe
Former South African President Jacob Zuma has dismissed claims that he handled a multi-million dollar stash of cash from Libyan leader Muammar Gaddafi following a report by local media that Pretoria has been asked to recover the money. Speaking to Sputnik, South African politics expert Dr. Dirk Kotze explained where the rumours may have originated.

South African Foreign Minister Lindiwe Sisulu promised to probe media claims about Zuma's alleged transfer of some $23 million in cash to the landlocked microstate of Eswatini, with the cash supposedly given to him by Gaddafi before his death, but admitted that the report sounds "very much like a ghost story…circulating for many, many years." South African newspaper Sunday Times claimed that Libyan authorities have already asked President Cyril Ramaphosa to recover the money. The report was the second time Libyan authorities claimed that Gaddafi hid away cash in South Africa. In 2013, the southern African country agreed to repatriate close to $1 billion to the self-proclaimed Libyan authorities.

Sputnik: Is it true that in 2013, Libyan funds equivalent to $1 billion US were transferred back to Libya from South Africa?

Dirk Kotze: We still have to get confirmation of this, but the reports that we have available at the moment suggest that at the time of the Arab Spring in Libya, [Muammar] Gaddafi asked President Zuma to keep his money in South Africa, because he thought that it might become necessary if he was arrested, for example, and taken to the International Criminal Court or another type of tribunal, and he would need money for that.

Ex-South African President Zuma Breaks Silence on Gaddafi Billions 'Ghost Story'
Apparently, that [money] was kept by President Zuma at his residence, his private residence, quite far from Pretoria and Johannesburg in KwaZulu-Natal, earlier this year. And then it was transferred, according to reports, to Swaziland, or Eswatini as the country is now called. So that is the latest that we have at the moment.

Sputnik: If that is the case, why do you think Gaddafi or his associates would choose South Africa as the place to transfer the funds to in the first place? What links were there between Libya and South Africa, or between Gaddafi and Zuma?

Dirk Kotze: Gaddafi had traditionally strong links with some of the political parties and movements in South Africa, not so much the ANC, the current government, but other liberation movements – the PAC – the Pan-African Congress. At the same time, after 1994 [and the end of Apartheid], President Mandela sought to develop close relationships with Libya…

President Zuma also became very closely associated with Libya, and there were some reports that he won the election for the ANC against former President Mbeki, that he was actually funded by Gaddafi and also by Angola. That created the impression that there were also personal links between President Zuma and Gaddafi, and I think that is possibly the basis on which this latest information should be assessed.

Secret Report Reveals How NATO War Against Gaddafi Could Have Started in Mid-80s
Sputnik: President Zuma is facing charges of corruption and money-laundering. Do you think that this situation will play into that particular case?

Dirk Kotze: According to the reports that we've seen, [Zuma] started to transfer this money to Swaziland exactly for this reason – that it should not complicate his own position. This is not necessarily illegal in terms of South African law. The problem is about how this money arrived in South Africa, and whether it went through the official procedures of foreign currency coming into South Africa, with the South African Reserve Bank being very much involved in those processes. So we don't know if that [procedure] has been followed, and that can create some complications for President Zuma also…

Sputnik: Do you think this is going to have an impact on the charges that Zuma is facing?

Dirk Kotze: No, it won't. The charges that he's faced with are charges about events that happened in the very early 1990s when he wasn't even the president of South Africa…It's about incidents that happened more than 20 years ago.

Dr Dirk Kotze is a professor of political science at the University of South Africa. The views expressed by Dr Kotze do not necessarily reflect those of Sputnik.