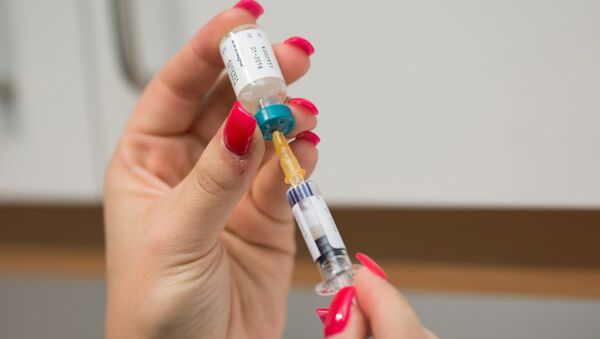 The viral disease is easily prevented via early childhood vaccinations. Guess who’s to blame for the outbreak.

Officials at the US Centers for Disease Control and Prevention (CDC) say 465 cases of measles have been registered in the country in 2019 as of last week, an increase of nearly 100 cases since the previous week's figure of 387, the New York Post reports.

This is already the largest number of measles cases since 2014, when a total of 667 cases were recorded, the officials say.

According to the report, the outbreak has hit several states, including California, Michigan and New Jersey, with New York City alone being responsible for about two-thirds of all cases reported last week.

About 80 percent of those infected are age 19 or younger.

Outbreak: Measles Public Emergency Declared in US Anti-Vaccine ‘Hotspot’
Measles, a disease caused by highly contagious virus, is characterized by such symptoms as fever, cough, runny nose, inflamed eyes and, of course, the trademark rash that spreads all across the body. Back in the mid-20th century, measles cases in the US numbered in the hundreds of thousands per year, but, by 1970, the disease had been nearly eradicated thanks to the introduction of a vaccine for it. By 1990s, doctors determined that a second dose of the vaccine is needed to ensure maximum protection, which almost made measles a thing of the past.

These days, with anti-vaccine movements becoming more popular, it is not exactly surprising that diseases formerly thought eradicated are reappearing. There is no known cure for those infected, with treatment confined to fever and pain relief and maintaining hydration while the patient's body fights the virus. However, the CDC says the two-dose vaccine is 97 percent effective at preventing infection. The vaccine remains effective for approximately 25 years, after which a test for vaccine renewal is necessary.