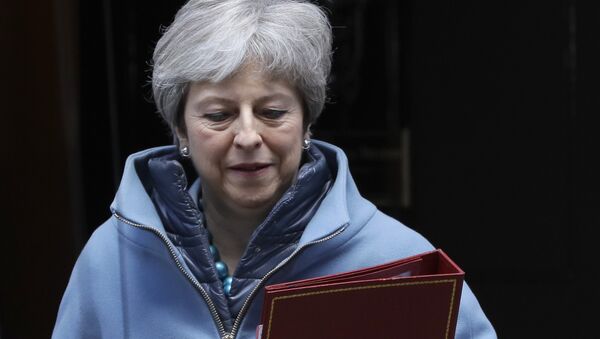 UK's Prime Minister Theresa May is considering giving British lawmakers a free vote on whether to hold a second Brexit referendum, looking for an opportunity to break the ongoing deadlock in talks with the opposition Labour Party, the Telegraph reported.

According to the Telegraph, Theresa May discussed the idea of offering to put her deal to a confirmatory public vote with some of her ministers on Monday. The newspaper also reported that May's chief enforcer in parliament is confident the government has the numbers to defeat any attempt to hold a second referendum.

Earlier in the day Reuters reported that the UK House of Lords had approved legislation that would provide the British Parliament the authority to alter May's request that the EU agree to delay Brexit until 30 June.

Parliament seized control of the Brexit process from May last month and is expected to agree a last-ditch deal on the terms of exit before an EU emergency summit on Wednesday.

UK PM May to Meet With Merkel, Macron for Brexit Discussion - German Gov't
In March UK lawmakers have rejected the amendment, tabled by lawmaker Sarah Wollaston, calling for a second Brexit referendum by 85 votes to 334.

According to YouGov poll, as many as 54 percent of the UK population sees a second Brexit referendum as a better option than a no-deal outcome, with 46 percent thinking otherwise as of the beginning of March.

The UK and the EU reached a divorce deal late last year, but the UK Parliament has refused to back the agreement and cannot agree on any alternative measures. The country was supposed to have left the bloc on 29 March but missed the deadline. The European Union gave London until 12 April to either come up with an alternative solution or leave without a deal on that day.