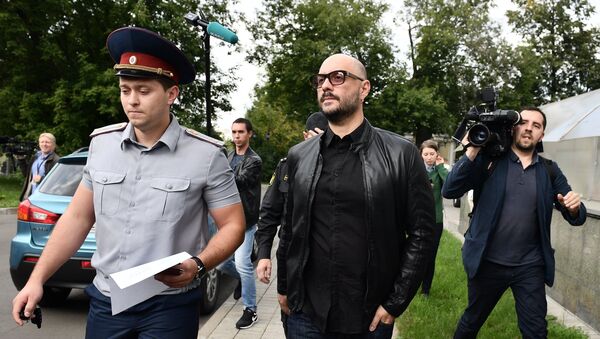 MOSCOW (Sputnik) - A Moscow court has changed the measure of restraint for Russian film and theater director Kirill Serebrennikov from house arrest to restricted residence, a Sputnik correspondent reported from the courtroom Monday.

"The court has ruled to change the measure of restraint for Serebrennikov [and other defendants in the case] from house arrest to restricted residence," the judge said.

The defendants and their lawyers did not hide how happy the decision made them, while some of the attendees wept with joy.

"We have performances and rehearsals of four projects and "Our Alla" [performance dedicated to Russian singer Alla Pugacheva] [in the Gogol Center theatre]," Serebrennikov said.

He added that he and two other defendants in the case who were also released from house arrest on Monday would seek to prove their innocence.

"I will be pleased when everything is over and when we prove that we are not guilty. While this is, of course, more pleasant [to be under restricted residence than under house arrest]," Serebrennikov said.

The Meshchanskiy Court in Moscow last Tuesday extended the house arrest for Serebrennikov, who is under investigation for alleged state funds embezzling, and other suspects in the case until July 4, but the defence appealed the decision.

While the prosecution insisted that the defendants should remain under house arrest since they could put pressure on witnesses, Serebrennikov stressed that all the witnesses had already been interviewed and asked to enable him and other defendants to return to work.

The investigators suspect Serebrennikov, the artistic director of Moscow-based theatre Gogol Center, and other defendants to be involved in embezzling 133 million rubles ($2 million) out of 214 million rubles allocated by the state for the development and popularization of modern art in Russia as part of the Platforma theater project in 2011-2014.

Serebrennikov, a winner of a prize of the Cannes Film Festival, has been held under house arrest since October 2017.