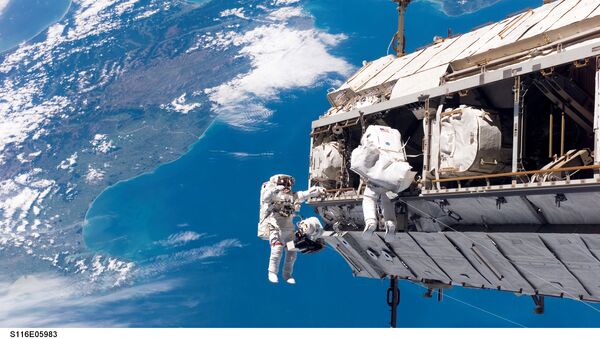 © NASA . handout
Subscribe
The ISS orbits 250 miles above Earth and has been visited over 222 times by astronauts, making the likelihood of freshly introduced bacteria a greater possibility.

Bacteria and fungi have begun breeding on the International Space Station (ISS), leading to the formation of antibiotic-resistant biofilms that could infect astronauts and destroy infrastructure, according to a new study.

The microorganisms, which NASA scientists have discovered, originate from human beings and are commonly found in public buildings on Terra Firma, and can even corrode metals in the space station, London-based journal Microbiome revealed.

Stress of Space Travel Can Reactivate Dormant Viruses in Astronauts
Dr Kasthuri Venkateswaran, a senior research scientist at the NASA Jet Propulsion Laboratory and one of the study's authors, said that the ISS was a "hermetically sealed closed system" subject to "microgravity, radiation, elevated carbon dioxide and the recirculation of air through HEPA filters, and is considered an ‘extreme environment'."

Dr. Venkateswaran noted that microbes could survive and thrive in extreme environments, and that species in the ISS may have lived there since it was built, with others being introduced during new astronaut visits and shipment arrivals.

Dr Venkateswaran added: "The influence of the indoor microbiome on human health becomes more important for astronauts during flights due to altered immunity associated with space flight and the lack of sophisticated medical interventions that are available on Earth.

As humans prepare for new forms of space travel, including trips to Mars and deep space missions, scientists should thoroughly examine the "microbiome of the closed space environment" to identify which microorganisms could accumulate, as well as "how long they persist and survive, and their impact on human health and spacecraft infrastructure," Mr. Venkateswaran said.