'We Will Be Invisible Again': Venezuelans Tell Sputnik WHY They Support Maduro 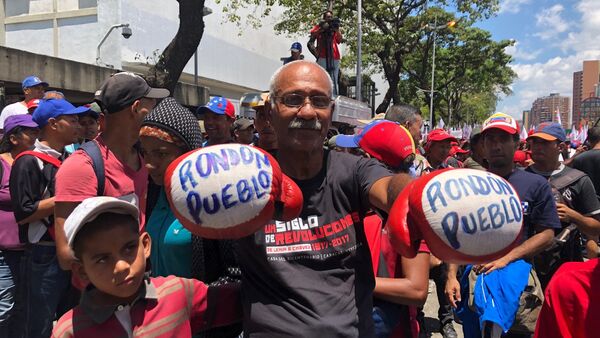 © Sputnik / Esther Yáñez Illescas
Subscribe
The Venezuelan political standoff has entered its tenth week, with lawmakers from the country's National Assembly seeking to strip self-proclaimed 'interim president' Juan Guaido of his parliamentary immunity amid what Caracas has described as a stalled US-backed coup attempt.

A Sputnik Mundo correspondent documenting Saturday's back-to-back pro- and anti-government protests in the Venezuelan capital got a sense of what pro-Maduro protesters were fighting for.

Maria is a 54-years-old resident of Maracay, a large city about 100 km west of Caracas. Along with thousands of other Venezuelans, she and her sister Marife and husband Leopoldo travelled to the capital by bus for Saturday's march, dubbed the 'March for Peace and Sovereignty'.

Maria came "for the country," she said, with pro-government forces mobilising across the country after it was hit by rolling blackouts and the associated fears of water shortages and lack of basic services last month.

President Nicolas Maduro, who was inaugurated for a second term in January only to face a challenge to his authority by opposition figure and National Assembly lawmaker Juan Guaido, has accused Venezuela's enemies of attempting to stage an "electricity coup", and of waging a "nontraditional war against public services" to sabotage the Latin American country.

Maduro encouraged Venezuelans to economise on light and water, and to stock up on candles and battery-powered radios in the event of a total energy collapse.

Сuban President Slams New US Sanctions on Venezuela as 'Act of Interference'
Sofia, a 35-year-old mother of two, encouraged her fellow Venezuelans not to give up. "If there's no water, look for it. If there's no light, find a way to make it, hold on!" she said, fist raised.

"Staying true to the legacy of President [Hugo] Chavez is more important now than ever," Sofia stressed. "If we fall now, the revolution falls, and that is what [Guaido and the opposition] want to achieve. Chavismo gave us the light we need…He gave us names, identity cards for the poor; if we fall, Venezuela's stateless opposition will arrive, and we will once again be invisible," she added.

According to the Center for Economic and Policy Research, Venezuela's poor benefited the most from the Chavez government's social and economic policy, with poverty dropping by over half from 62.1 per cent of the population in 2003 to 31.9 per cent in 2011, and extreme poverty falling from 29.8 per cent to less than 10 per cent over the same period.

In the years that followed, falling oil prices, US sanctions, and economic mismanagement put a damper on the positive upswing. Nevertheless, even the political crisis has not managed to stop improvements in health care, education and housing for millions of poor Venezuelans.

On Saturday, Maria, Sofia and thousands of others gathered at the Miraflores Palace presidential offices, where President Maduro took the stage to address his followers. "Leales siempre, traidores nunca!" – "Loyalists Always, Traitors Never!" he shouted, repeating the mantra heard often in recent weeks. "What a brave people we have," he added, calling on Venezuelans to be prepared to do everything in their power to save the gains made by the Bolivarian Revolution.

Military Option 'Seriously Considered' by Washington in Venezuela - Official
Things weren't easy, Maduro admitted, saying the recent attacks on the National Electric System (SEN) were aimed at "leaving the country without light for several months. We are in a real electrical emergency, in a real national emergency," he said, asking Venezuelans to be patient amid electricity rationing over the next few weeks while power systems are repaired and secured.

On the other side of the city, thousands of members of the opposition held their own march, carrying out a practice run of 'Operation Libertad' ('Operation Freedom) – a Guaido-planned mobilisation across the country aimed at culminating in a massive march through the capital to exert "maximum popular political pressure" on the government.

Venezuela's political crisis escalated in late January, after Maduro declared himself 'interim president' and received the immediate recognition of the US and many of its allies. President Maduro slammed the move, describing it as an attempt to carry out a foreign-backed coup d'etat. Russia, China, Cuba, Bolivia, Turkey and numerous other states have voiced their support for the Maduro government, or urged outside powers not to meddle in Venezuela's affairs.

000000
Popular comments
Like Porkyshenko from the Ukraine, Shakasville from Georgia and now Guido form Venezuela failed protégés trained and supported by the GIA's Regime changes. Is anybody going to put a stop to that terrorist organization from America?