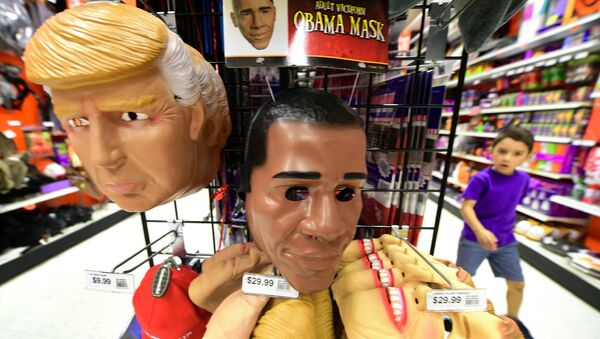 The scandal began when sixth grade students at a school in upstate New York were asked to pick an individual whom they looked up to and write an essay explaining why they felt the individual is heroic.

11-year-old Samoset Middle School student Bella Moscato is at the heart of a new partisan scandal after allegedly getting banned by her teacher from choosing President Donald Trump as her hero for a school project, even though another student was allowed to write about former President Barack Obama.

Moscato's outraged parents, Arthur and Valarie Moscato, spoke out about the incident at a school board meeting, saying their daughter had been subjected to intimidation and censorship, News 12 Long Island has reported.

The mother says the school tried to silence her daughter over @realDonaldTrump project https://t.co/fRXYWefyHu

"My daughter's hero is the president of our country. I can't believe that anybody in the school would tell my daughter…that this guy can't be her hero. I'm incensed by this," Arthur Moscato said.

"It was really upsetting to me that she was trying to shut her down," Valarie Moscato added.

Bella told News 12 that her teacher told her that she couldn't write about Trump "because he spreads negativity and says bad stuff about women."

"The thing I didn't get is she was okay with someone doing Barack Obama, but not okay with doing Donald Trump. That's what got me angry and I didn't like that," the girl said.

Samoset Middle School superintendent Dr. Kenneth Graham said Moscato's version of events was "not accurate" and that students weren't actually forbidden from choosing Trump, with the girl still doing her project on Trump. The school board has promised to carry out an internal investigation, and said they would not discuss the alleged incident publicly.

The Moscatos say they expect an apology from the teacher. That doesn't seem to be enough for some partisan armchair warriors online, however, with conservatives outraged over what they see as an act of censorship, while anti-Trumpers defended the teacher's decision.

The news received a retweet from President Trump's son Don Jr., with former Fox news and NBC News journalist Megyn Kelly calling the story "insane." Other users suggested that teachers "should do their jobs and teach students instead of pushing their political opinion on them" and asked for the Trump-banning teacher to be fired.

This is insane. Good for this kid and these parents for standing up for her rights. What is happening to us? https://t.co/wXppXLu608

An 11-year-old girl named Bella Moscato was not allowed to have President Donald Trump as her hero for a class assignment.

Teachers should do their jobs and teach students instead of pushing their political opinions on them.

I’m glad the parents are fighting back. This is uncalled for

Our public school systems are an absolute mess. It’s why they don’t want choice when it comes to education because people will choose to remove their children from the indoctrination centers.

The teacher should be fired. She doesn’t deserve teaching her opinions on our youth growing up no matter what she believes

Anti-Trumpers stuck to their guns, however, insisting that this was not a free speech issue, or suggesting that there were other more important news stories out there. Some even accused the Moscatos of "bad parenting."

Oh the horror of not letting a child debase themselves in front of their classmates. Thanks News 12 for covering the most important issues of the day. Btw Antarctica is melting.

Good for the school. Shame on some parents out there. Trump is the opposite of a hero in every way.

This is not even remotely about free speech. If the kid had picked Charles Manson or Osama bin Laden they would have also been told “no”. This is a school, and teachers are instructing children about right and wrong.

I despise Trump, but I think she should've been able to do the project on who she wanted to

Teachers, please stop doing stuff like this. We have the privilege to work with the future, not the right.

Good Lord. Can you imagine if the story was reversed? Why is it so hard for people to keep the same standards regardless of any other external factors???