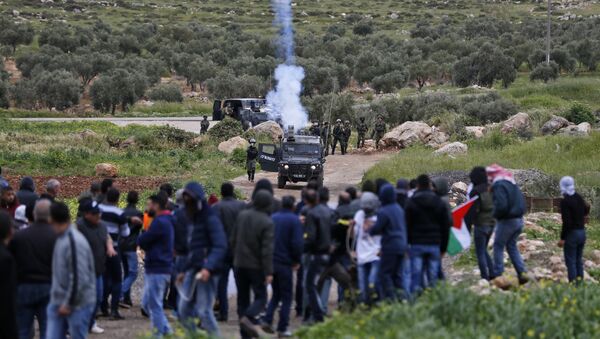 © AFP 2021 / Abbas Momani
Subscribe
Earlier, the Israeli prime minister hinted that he may annex the West Bank’s Area C, which is fully controlled by Tel Aviv. He also announced that he had told US President Donald that in his opinion, all settlements in the West Bank "must remain under Israeli sovereignty".

Israeli Prime Minister Benjamin Netanyahu has announced that he is going to extend Israeli sovereignty over settlements in the occupied West Bank territories if he wins another term in the upcoming elections, which are set to place on 9 April, Reuters reported.

"You are asking whether we are moving on to the next stage — the answer is yes, we will move to the next stage. I am going to extend [Israeli] sovereignty and I don't distinguish between settlement blocs and the isolated settlements", he said in an interview with Israeli Channel 12.

Speaking in an interview with Channel 13 on Friday, Netanyahu said that in his opinion "all the [West Bank] settlements must remain under Israeli sovereignty" and that he had forwarded his position to US President Donald Trump. When asked whether he believes Trump would recognise the move, the Israeli prime minister said to "wait until the next term".

"I promise that you will be surprised. I cannot talk about the plan, but [US President Donald] Trump is a big friend and I doubt there will ever be any bigger friend than him", he said durinng an interview with Hebrew-language daily newspaper Israel Hayoum.

Since the inauguration of President Donald Trump, the US has made several moves in support of Israeli territorial claims. First, Trump recognised Jerusalem as Israel's capital and moved the American Embassy there from Tel Aviv, where most diplomatic missions are located, in May 2018.

Later, on 25 March, the US recognised Israeli claims over the occupied Golan Heights, where Tel Aviv recently held municipal and local elections. Both recognitions were widely condemned by the international community and the UN, but welcomed by Tel Aviv.

The move of the US Embassy to Jerusalem also sparked protests at the Gaza border, which have been ongoing for over a year on a weekly basis. The protesters have regularly clashed with Israeli forces on the border, leading to hundreds of casualties during the course of the rallies. Tel Aviv has denounced the protests, claiming that they are organised by Hamas to covertly attack Israel.

000000
Popular comments
Now you know clearly why we call em "parasites". Imagine if you were a Palestinian, some khazari barbarian goons with support of super powers trying to steal your land, piece by piece, and you can't do anything but watching their oppression and the disgusting silence of world powers.

Ardy
6 April 2019, 21:15 GMT5
000000
They won't stop until they are made to stop and it will probably have to be Iran and its allies that does the stopping. I suspect they are waiting for the western system to collapse before they confront this problem as the west cannot seriously expect any kind of help or sympathy once their financial empire collapses.
happy1
6 April 2019, 21:23 GMT6
000000
Newsfeed
0
New firstOld first
loader
LIVE
Заголовок открываемого материала
Access to the chat has been blocked for violating the rules . You will be able to participate again through:∞. If you do not agree with the blocking, please use the feedback form
The discussion is closed. You can participate in the discussion within 24 hours after the publication of the article.
To participate in the discussion
log in or register
loader
Chats
Заголовок открываемого материала
Worldwide
InternationalEnglishEnglishMundoEspañolSpanish
Europe
DeutschlandDeutschGermanFranceFrançaisFrenchΕλλάδαΕλληνικάGreekItaliaItalianoItalianČeská republikaČeštinaCzechPolskaPolskiPolishСрбиjаСрпскиSerbianLatvijaLatviešuLatvianLietuvaLietuviųLithuanianMoldovaMoldoveneascăMoldavianБеларусьБеларускiBelarusian
Transcaucasia
ԱրմենիաՀայերենArmenianАҧсныАҧсышәалаAbkhazХуссар ИрыстонИронауОssetianსაქართველოქართულიGeorgianAzərbaycanАzərbaycancaAzerbaijani
Middle East
Sputnik عربيArabicArabicTürkiyeTürkçeTurkishSputnik ایرانPersianPersianSputnik افغانستانDariDari
Central Asia
ҚазақстанҚазақ тіліKazakhКыргызстанКыргызчаKyrgyzOʻzbekistonЎзбекчаUzbekТоҷикистонТоҷикӣTajik
East & Southeast Asia
Việt NamTiếng ViệtVietnamese日本日本語Japanese中国中文Chinese
South America
BrasilPortuguêsPortuguese
NewsfeedBreaking
19:03 GMT'Things Are Screwed Here': Documents From the Last Days of Hitler’s Bunker Unveiled by Historians
18:58 GMTRepublican Congressman Ends House Speech With 'Let's Go, Brandon' – Video
18:54 GMT'So Cringe': Kamala Harris Slammed Online for Her 'Eating & Drinking No'' Motto
18:47 GMTBeijing Blasts Biden Over Pledge to ‘Defend Taiwan’, Urges US to ‘Be Cautious With Words, Actions’
18:39 GMTUS Claims 'Right to Respond' to 'Deliberate and Coordinated Attack' on at-Tanf Base in Syria
18:36 GMTWATCH: Kamala Harris Heckled as She Promotes Biden's Build Back Better Agenda
18:29 GMTMillionaire Real Estate Heir Robert Durst Charged With 1982 Murder of Wife
17:40 GMTWhite House in Damage Control Mode as Biden Suggests Using National Guard to Solve Supply Chain Woes
17:27 GMTUK-New Zealand Trade Deal to Stipulate Protection of Maori War Dance
17:14 GMTPolice Cordon Off Area Outside UN New York HQ Over 'Suspicious' Package - Video
17:10 GMTIndia Boosts Anti-Submarine Warfare Capacity as it Buys Torpedoes for P-8 Spy Jet From US
16:54 GMTMan Arrested at UK Airport Over Manchester Arena Bombing
16:50 GMTTrading of Trump Social Media App-Linked Stock Halted Repeatedly After Turning Into Memestock
16:48 GMTUS Judge Sets 4 November for Hearing on Trump's Executive Privilege Claim in Capitol Riot Inquiry
16:42 GMTTaylor Greene Introduces Articles of Impeachment Against Biden for 'Abusing Power to Aid His Son'
16:04 GMTAUKUS: Will Australia's Fault Lines With ASEAN Limit US' Ambitions to Contain China in Indo-Pacific?
16:04 GMTAlec Baldwin Called Out Online for Old Tweet About 'Wrongfully Killing Somebody'
16:03 GMTIndia's Main Opposition Party to 'Expose' BJP & AAP Ahead of Delhi Municipal Polls
16:03 GMTFrench Armed Forces Minister Urges NATO Not to 'Be Afraid' of EU Defence Integration
15:53 GMTSteele's Interview is Bait to Divert Public From Trump's Rising Polls & Durham's Probe, Analyst Says