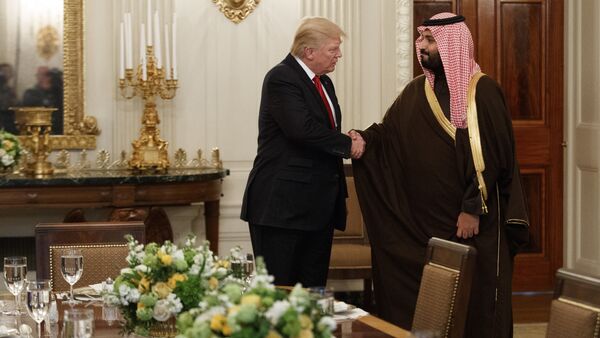 WASHINGTON (Sputnik) - The United States will never allow Saudi Arabia to become a nuclear power and threaten its security and that of Israel, US Secretary of State Mike Pompeo said in an interview on Friday.

"We will never write a $150 billion check to the Saudis and hand them over the capacity to threaten Israel and the United States with nuclear weapons. Never", Pompeo said in an interview with CBS News.

The $150 billion figure is a reference to the Iran nuclear agreement negotiated by the administration of President Barack Obama.

Earlier this week, satellite images revealed that Saudi Arabia is nearing the completion of its first nuclear reactor. At the same time, US Senators Marco Rubio and Bob Fernandez urged Energy Secretary Rick Perry in a letter on 2 April to not supply any nuclear technology to Saudi Arabia given Riyadh’s troubling record, which includes the killing of Saudi journalist Jamal Khashoggi.

The United States lacks any framework pact, or "123 Agreement" for any bilateral nuclear cooperation with Saudi Arabia, yet the Energy Department has already approved multiple licenses for US companies to sell nuclear energy technologies, Rubio and Fernandez said.

US, EU Arms Lobby Impeding Weapon Export Ban to Saudis – Ex-DoD Analyst
The situation between the countries has been intense since Trump announced in May last year the United States’ withdrawal from the nuclear agreement and the reinstatement of US sanctions against Iran. The sanctions target Iran as well as anyone who chooses to continue trading with it.

The US move has been slammed by the remaining parties to the nuclear agreement — Iran, China, Russia, France, Germany, the United Kingdom and the European Union — who insist that Iran was honouring the deal.