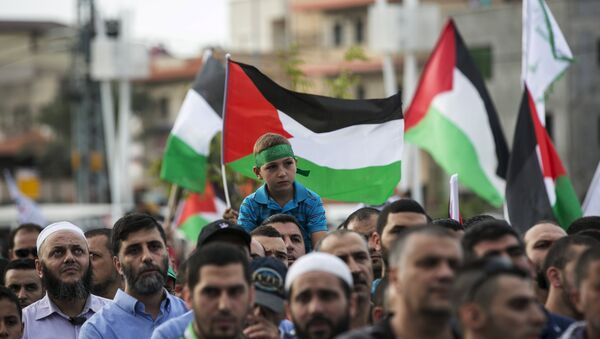 © REUTERS / Baz Ratner
Subscribe
As Israelis are preparing to go to the polls to elect their new Knesset on 9 April, the ballot is largely being viewed as a referendum on the country’s four-time elected prime minister, Benjamin Netanyahu.

Sputnik discussed the upcoming elections in Israel with Dr Yousef Jabareen, a Palestinian member of Knesset and candidate from the Ta'al and Hadash parties' joint list.

Sputnik: This is the sixth election in which Arab-led parties and their candidates have been forced to fight disqualifications; please share with us your own experience during this campaign.

Saturday's Gaza Clashes Killed 5 Palestinian Protesters - Health Authorities
Dr Yousef Jabareen: As you said, each election in the last few elections is when right-wing parties started this campaign of delegitimising our political participation in the Knesset through basically trying to disqualify us in the central Knesset committee — and there's been a decision of the Central Election Committee to disqualify us. Luckily, the Israeli Supreme Court has decided differently and allowed us to participate in the election.

Maybe it's about time to change this law that allows for a political committee, which is the Central Election Committee — it's a political committee — it's about time to change the law and basically to take from the committee its authority to disqualify parties. We have been really suffering for about one full week focusing on this issue instead of reaching out to our community and to our supporters for the election campaign.

Sputnik: You are a candidate from the Ta'al and Hadash parties' joint list, there are two Arab-led parties running for Knesset; what are you offering your voters and how different is it from the Ra'am and Balad platform?

Dr Yousef Jabareen: Well Hadash, our party, is basically having the name of another democratic front for peace and equality, and I would say these three words in the name of our party: democracy, equality, and peace are the main political issues that we are really focusing on.

WATCH Woman Tossing Tomato at Israeli Prime Minister Netanyahu in Tel Aviv
Israeli democracy is in danger, I believe, in the shadow of the campaign of the right-wing, and now they're almost finishing the fourth Netanyahu government, with his coalition with extreme right-wing parties. Striving for real democracy in Israel, not just talking democracy, is one of our main issues.

The second issue is equality, equality for the Arab-Palestinian community within Israel. We're about 20% of the population, 1.5 million, and we have been suffering from historical marginalisation and exclusion and our main political struggle has been to achieve equality as full citizens in Israel and to be recognised as a national minority, ethnic minority and indigenous minority in Israel; so we are struggling for both — for individual equality and for collective equality as a national minority.

When it comes to the other Arab party, in these issues we share a similar platform, we used to be in the same joint list in the last election; however, the focuses are different. The other party includes, for example, the Islamic movement, which has more of religious ethics in their platform and I believe that we have the full credit of serving our community for now over seven decades within the Communist Party and now within Hadash. We have this impressive record of struggling to preserve our identity as Palestinians and to save our basic rights in our homeland.

Dr Yousef Jabareen: I think so. When we say that the last government had legislated this racist law, the nation-state law, that includes these provisions about excluding Arab citizens from main areas, basically from main governmental services like in the area of land and housing; in the area of language, and in the area of identity; in the area of the symbols of the states. In the last two years, the issue of discrimination is becoming deeper and there are more and more racist legislations and racist policy on the part of the government, which basically means that this would be the main issue now in our struggle.

'Bolsominion': Lulz as Neymar Accepts Netanyahu's Invitation to Visit Israel
It touches upon all areas of our life: it starts from issues of discrimination of allocation of resources to our municipalities and to our communities; it causes discrimination of allocation of land, there's also the ongoing process of confiscating our land that remained in our hands, and there's also these racist attitudes that we face in employment and in public accommodation.

So generally speaking, yes, there is this ongoing treatment of our community as second or third class citizens and our main struggle remains to defend our rights and to struggle for first-class citizenship in Israel, in our homeland.

As I said, that would go along our national struggle to support the struggle of our Palestinian people to establish a sovereign Palestinian state alongside Israel with East Jerusalem as the capital. These are the main issues and they will continue to be the main issues also in the following election and in our work under the next government in Israel.

Sputnik: Looking at these elections, one wonders what kind of real change they might bring to Israeli Arabs. Last year, the Knesset praesidium refused to allow a bill entitled  Basic Law: State for All Its Citizens, proposed by Balad, to be taken into consideration; your own bill, entitled Democratic Multicultural and Egalitarian State, was dismissed in the early stages of parliamentary debate. Can there be a real changes brought about by these elections to Israeli Arabs?

Dr Yousef Jabareen: It seems like this is now an open question because nobody knows if Netanyahu will be able to establish his fifth government or maybe the opposing party will do that. I'm afraid that if Netanyahu establishes another extreme right-wing government with extreme right-wing parties, I'm afraid that the issues of discrimination and exclusion against our community will get deeper and we will find ourselves in a more difficult situation during the next government.

‘It’s Not About The Benjamins’: Netanyahu, Omar Engage in Duel of Words
However, I still hope that we have few more days, the Israeli public will understand that Netanyahu is leading the area to continue confrontation without bringing any hope.

I would like to believe that the Israeli public will not give him more options to be in government again and again, especially now that he's facing very serious criminal charges. On the other hand, I want to hope that any alternative government would really bring change, not just another Netanyahu government or another copy of a Netanyahu government.

This is a serious change, and we still don't know what the situation will be. In any case, we will continue our struggle to achieve the goals that we have discussed. Hopefully, if the right-wing or the extreme right-wing parties stay outside in the next government, that might be the start of change, if not the change itself.

Sputnik: During recent months we've witnessed the United States taking several steps demonstrating support for Israel: the American Embassy and the Consulate were moved to Jerusalem; the US has recognised Israeli sovereignty over the Golan Heights. To what extent do these events affect the upcoming poll?

Dr Yousef Jabareen: It seems to me that it's clear that the timing of the American proclamation was a clear intent to help the Netanyahu campaign and I see this as a clear interference in the Israeli election. We see a clear coalition between the Trump administration and the Netanyahu administration here in Israel; that's a clear coalition between right-wing in the US and right-wing here in Israel. This is really unfortunate and it also goes against the historical stand of the US against occupying the Golan Heights.

UN Chief Slams US' Golan Move, Says Syrian Peace Requires Territorial Integrity
The Golan Heights are Syrian territory and will remain Syrian territory, and we have here the EU position — there are no changes — and basically, the world position about that is the America change goes against international law, it goes against the international consensus about the Golan Heights being an occupied Syrian territory. I have to say that I'm afraid that this will pave the way for the following declaration about some kind of recognition of Israeli settlements in the occupied Palestinian territories as a sovereign Israeli area.

This is dangerous, this goes against not just international and Palestinian interests, but I believe this goes against the Israeli interests as well because this will perpetuate the confrontation, perpetuate the conflict and keep the despair in the area. The hope would come only from a peace campaign and a peace process that would recognise the Palestinian state of the 1967 borders and basically recognise the Golan Heights as a Syrian area and basically give it back to Syria. This is the only hope for the region and this is the only hope for the international community in general.

Views and opinions, expressed in the article are those of Dr Yousef Jabareen and do not necessarily reflect those of Sputnik.