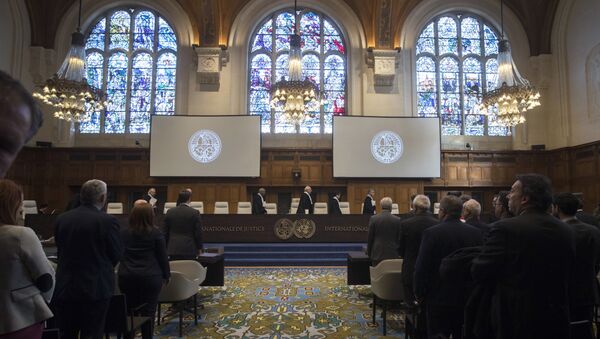 BELGRADE (Sputnik) - Lawyers of the former Bosnian Serb leader Radovan Karadzic, who was sentenced by the Appeals Chamber of the International Residual Mechanism for Criminal Tribunals to life imprisonment, are preparing a revised appeal, lawyer Goran Petronijevic told Sputnik in an interview.

"We will soon prepare an audit in the appeal, which will contain other arguments. We are now preparing the main thing that we have announced — new facts, new evidence, we will resolve the issue within this framework," Petronijevic said.

Karadzic's defence is sure that this time Judge Carmel Agius was mistaken in deciding that there had been no basis for such an appeal, he noted.

"The chamber applies the so-called hybrid law model, that is, 95 percent of Anglo-Saxon law and 5 percent of European law. In Anglo-Saxon law, the decision on punishment and the decision on the actual state and essence of the case are different things. And we did not include the meritum [the essence of the case] in our application for appeal, because we considered that we had no right to file a regular appeal, since the sentence was final. But we also believe that under Anglo-Saxon law we can appeal a punishment that had been approved in violation of many precedents," the lawyer explained.

He noted that in Anglo-Saxon law, if the actual state of affairs did not change and, thus, the defendant’s measure of responsibility should not increase, as was in the Karadzic case, tougher penalties cannot be applied.

"In addition, the Appeals Chamber referred to several precedents with convictions in other cases of the International Criminal Tribunal for the former Yugoslavia, completely disregarding the huge difference in the degree of responsibility of convicts… These were all people convicted of committing crimes directly. And Karadzic was convicted of milder types of responsibility, that is also incomparable," Petronijevic said.

According to the lawyer, the current presiding judge Agius, who took the post after the famous Theodor Meron, is no better than his predecessor, since he deprived Karadzic of the right to appeal just to finish the case as soon as possible.

"He denied us this right, but he didn’t deprive us the opportunity," he said.

Karadzic, 73, ruled the Republika Srpska between 1992 and 1996. He was arrested in 2008 in Belgrade after having been on the run for over a decade. He has faced charges since the end of the Bosnian War, which erupted between Bosnian Muslims, Serbs and Croatians in 1992, when Bosnia and Herzegovina proclaimed independence following the dissolution of Yugoslavia.

Karadzic was found guilty including on planning the Srebrenica massacre, the largest mass atrocity in Europe since the Holocaust, that ended with 8,000 Muslim Bosniaks being killed in July 1995.