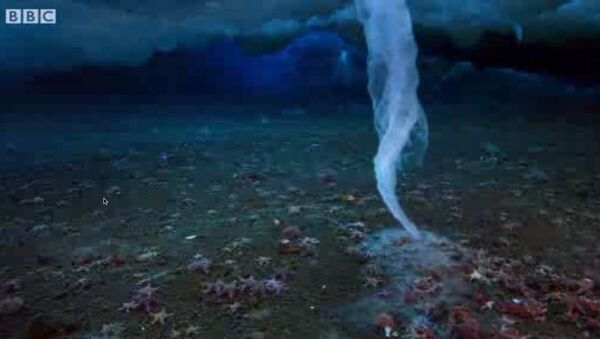 The fascinating natural phenomenon was first discovered in the middle of the 20th century, but properly documented only in 2011. The process of the "ice stalactites'" formation has long remained a mystery to scientists.

The captivating footage of brinicles forming under thick layers of ice was first shown to the public in the BBC series Frozen Planet eight years ago. Although the existence of the phenomenon, also known as "ice finger of death", had been known since it was first described by oceanographer Seelye Martin in 1962, the first footage made was only decades later.

Brinicles under 15 ft of sea ice in McMurdo Sound, Antarctica. We were studying a new methane seep habitat here in 2016, trying to understand how it related to methane seeps we see around the globe.

Brinicle is essentially an "ice stalactite" growing from the ice covering the ocean down to its bottom. The process of its formation starts when the ice-cold and relatively non-saline water from the ice cover mixes with salty ocean water. The resulting "stalactite" is hollow within allowing more cold and less salty water from the bottom to run through the canal inside the brinicle.

Some of them can reach the bottom of the ocean if it's not too deep and if there are no currents in the region. That is when they turn into real "fingers of death" — their growth doesn't stop at that moment and the ice starts spreading across the ocean bottom, freezing everything on its way, including living beings residing on the ocean floor, such as starfish. The terrifying process can be clearly seen on a video, published on Instagram.