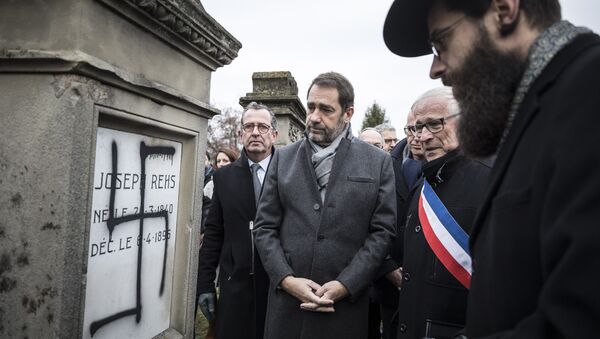 Thursday’s talks saw the G7 agree on the crucial importance of finding ways to prevent the “dispersal of foreign terrorist fighters and their families” around Europe and the US.

French Interior Minister Christophe Castaner has dismissed earlier reports that his country is floating an idea of repatriating Daesh* militants and their families detained in Syria after the self-proclaimed “caliphate” of the terrorist group was finally eliminated in the last Daesh stronghold of Baghouz in March.

“It's logical that our services considered all hypotheses. This was one of the hypotheses they prepared”, Castaner said at a press conference on Friday on the heels of the G7 interior minister talks in Paris.

He further stated that no communal repatriation was ever viewed as a possible option, reiterating that France would still consider bringing back terrorists’ children, “either orphans or [children] isolated from their parents”, but on a “case-by-case basis”.

According to the UN children's agency UNICEF, around 3,000 foreign children from 43 countries are housed at the Al-Hol camp in Syria alone, which has taken in the most people fleeing the Daesh "caliphate" in recent weeks.

French daily newspaper Liberation released an article on Thursday reporting that in early March, the government had been prepared to bring home around 250 men, women, and children, but had to abandon the plan following public outrage at such mass repatriations.

Addressing the issue in his speech, Castaner denied the newspaper’s assumption that France’s policy regarding Daesh fighters is determined by the general public’s opinion.

During the Thursday meeting, interior ministers of the Group of Seven most advanced economies, including Germany, France, and the US, agreed on the need to "do their utmost to prevent the dispersal of foreign terrorist fighters and their families”, French media cited the chairman, Christophe Castaner, as saying.

Jihadists’ repatriation remains a sensitive and politically fraught topic in the Western world, with France, for instance, not having fully recovered from the Daesh-claimed attack in November of 2015, in which 129 people were murdered. Western countries appear to be looking a tad differently at how best to handle the repatriation issue.

The United States recommends that each country take charge of its own jihadists and judge them on its territory, whereas France wants the perpetrators to be judged on the spot. In a Thursday interview with Le Figaro, Castaner stated that his country’s proposal “deserves to be studied”, likewise the infrastructure for terrorists’ legal prosecution on the spot. “We must install a prison, make magistrates available", he specified in the interview.

Current government figures suggest that up to 1,700 French nationals travelled to Iraq and Syria to join the terrorists between 2014 and 2018, with about 300 fighters believed to have died in combat.