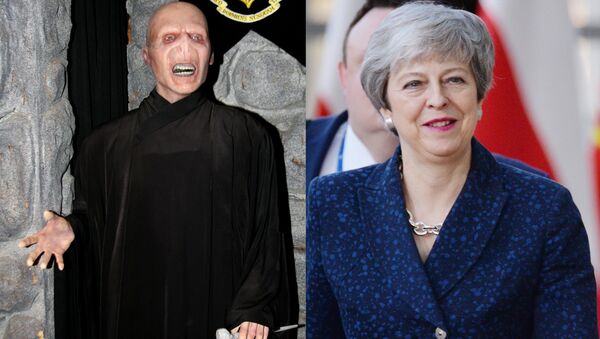 CC BY 2.0 / Cliff / Voldemort
Subscribe
For those who aren't quite sure about the progress of Brexit talks in the UK and what is happening between the leaders of main political parties, an analogy with J.K.Rowling's bestseller may just clear things up.

On Wednesday, the UK PM Theresa May has met with the leader of the opposition Labour party, Jeremy Corbyn, to discuss a compromise that would see a Brexit deal approved by the required majority of MPs. Conservative party Brexiteers disapproved of the move, dismissing the idea that Corbyn could be part of any solution.

A source within the Conservative party has reportedly compared Theresa May turning to Labour to Rowling's Harry Potter villain Voldemort having his soul broken. The remark was shared by a journalist on social media, causing an outburst of comments.

Tory source on PM pivoting to Labour: "It's getting like the bit in Harry Potter where Voldermort's soul breaks apart. She is now tearing apart the soul of the party. She has split the soul into a Labour horcrux."

The tory party admitting "hey, we are the baddies, we are the Voldermorts". pic.twitter.com/btsZ8htCsh

The Tory Party being compared to Voldemort? One intent on destruction, pure evil, bitterness coursing through their very being, with lackeys willing to do their awful bidding, and the other is Voldemort. pic.twitter.com/Ei1vyZSfQp

In the Harry Potter series of books, Voldemort has split his soul in seven pieces in order to achieve immortality and placed them in various objects, an animal and Harry Potter himself. According to the plot, every time the Dark Lord created a horcrux, he would metaphysically damaging his own soul.

So by this analogy, Mark Francois is Peter Pettigrew, right?
Andrea Leadsom — Dolores Umbridge
Michael Gove — Nagini
Boris Johnson — Gellert Grindelwald
And of course, Jacob Rees-Mogg has to be Voldemort.
Any others?@jk_rowling#Brexit

Harry Potter is about the level at which many of our MPs are able to think. Not to denigrate the HP novels — but they are written for children! If Brexit has done anything, it has exposed just how little MPs seem to know or understand about very much at all.

So they just Theresa May is Voldemort, and the members are her Death Eaters? https://t.co/obW5ckBlZ7

Theresa may is Voldemort in a wig

On 4 April, Theresa May continued talks with the opposition in search of a new plan to break the Brexit gridlock, despite her party having suffered resignations in the light of the PM reaching out to Labour.