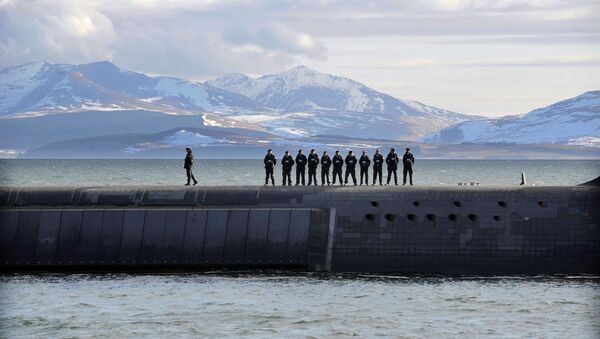 Whitehall’s spending watchdog has found that the storage of obsolete nuclear submarines has cost the UK taxpayer £500m because of “dismal” failings in the government’s nuclear-decommissioning program. Sputnik spoke about it to Arthur West, the Chair of Scotland's CND.

Sputnik: Whitehall's spending watchdog has found that the storage of obsolete nuclear submarines has cost the UK taxpayer £500m because of "dismal" failings in the government's nuclear-decommissioning program. How significant are these findings?

UK Nuclear Submarine Almost Crashes Into Passenger Ferry in Irish Sea – Reports
Arthur West: The figures are remarkably high, unfortunately, it's not that surprising given the Ministry of Defence's track record. Certainly, it's very worrying from a health and safety point of view, but it's also very worrying about the east coast possibility getting out of hand in the future. So, there obviously has to be some action taken and taken pretty quickly.

Sputnik: What effect will this have on efforts for nuclear disarmament both in the public and political consciousness?

Arthur West: Yes, I think one of the main reasons for getting rid of nuclear weapons is not only the cost of maintaining but then the cost of disposing of them, the submarines and the nuclear waste material left over. So I do actually think this will emphasize to the public the cost and that I think might see most people questioning whether we actually need to renew the current range of nuclear weapons that we've got that the government seem intent on doing.

Quarter of World's Power Could be Nuclear by 2050 Despite UK 'Disappointments'
Sputnik: From a Scottish perspective the arguments are very different from the ones in England. Could we see a massive shift in public opinion going forwards across the whole of Britain rather than just say Scotland on the West Coast?

Arthur West: Yeah, I think that could be the case. Obviously, it's very much an issue for ourselves because 25 miles down the road from our biggest city we have these nuclear weapons, these weapons of mass destruction, and it's an astonishing and sad fact of life but that obviously helps to galvanize in the majority and the evidence is there. A majority of Scottish public opinion is opposed to these nuclear weapons. I think these revelations over the cost and the difficulties of disposing of the waste will bring further people to our position across the UK. It certainly encourages us to double our efforts to stop the replacement of the current nuclear weapons and get rid of them completely.