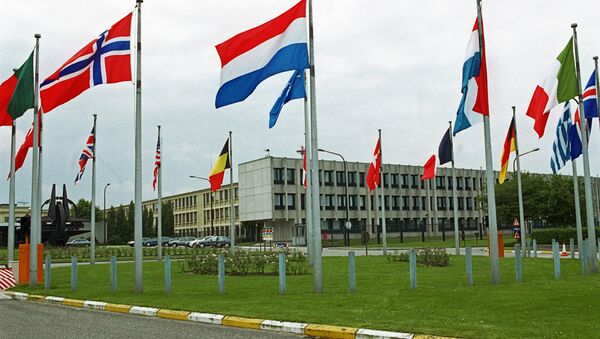 NATO Secretary General Jens Stoltenberg and US Secretary of State Mike Pompeo have made opening remarks at the Meeting of the North Atlantic Council at the level of Foreign Ministers in Washington, DC on 4 April.

The event took place after strong criticism from Donald Trump, who has recently questioned NATO's necessity in relation to his government's foreign policy.

Turkey's move to buy Russian air defence systems is a "national decision", but NATO members may discuss the issue on the margins of an alliance ministerial meeting in Washington, NATO Secretary General Jens Stoltenberg has stated.

"It is a national decision of each NATO ally to determine its own capabilities", Stoltenberg told reporters when asked whether he sees any potential resolution on Ankara's plans to buy the S-400.

Stoltenberg acknowledged that this "an issue of great disagreement between NATO allies".

He noted that the alliance provides a platform to resolve such issues.

NATO ministers are not planning to discuss the S-400 issue in Washington but the matter could be raised on the sidelines of the ministerial, Stoltenberg said.

Hope for Solution on US-Turkey Disagreement Over Russian S-400

NATO Secretary General Jens Stoltenberg in a press conference on Thursday said that he is hopeful that a solution will be found to the ongoing disagreement between the United States and Turkey over Ankara's procurement of Russia's S-400 defence systems.

"I hope that it is possible to find a solution to this issue because we see now that this is an issue where this disagreement between two allies Turkey and the United States", Stoltenberg said.

"It is a national decision what kind of systems different NATO allies procure, but we fully realize that this is now a challenge and it is an issue that has been discussed and is addressed by the United States and Turkey", the NATO chief pointed out.

Stoltenberg also noted that the matter is not on the agenda of the alliance's ministerial meeting currently being held in Washington DC.

"We have to remember that NATO is augmenting the air defences of Turkey and we do that by deploying Spanish Patriot batteries to Turkey and also Italy is deploying SAMP/T batteries augmenting the Turkish air defences," Stoltenberg added. "I also welcome the fact that there is an ongoing dialogue between the United States and Turkey on the delivery of Patriot systems to Turkey and also that there is a dialogue going on between Turkey, Italy, and France looking into the possibility of delivering French-Italian systems SAMP/T".

Even US President Donald Trump had admitted in talks over the telephone that the previous administration made a mistake to not sell US Patriot missile systems to Turkey, Cavusoglu noted.

The Turkish foreign minister stated that Ankara had recently received a proposal from the United States on a possible purchase of the Patriot systems, but emphasized that the proposal does not mean Washington will sell such systems to Ankara.

Cavusoglu also said NATO is not yet capable enough to cover Turkish airspace, and the S-400 does not need to be compatible with NATO weapon systems or the US F-35 jet.

NATO Must Adapt to Confront Emerging Threats From China, Russia

US Secretary of State Mike Pompeo, in turn, stated that NATO must adapt to face new global security threats including Russian aggression and Chinese strategic competition.

"We must adapt our alliance to confront emerging threats. Whether that's Russian aggression, uncontrolled migrations, cyber attacks, threats to energy security, Chinese strategic competition, including technology and 5G, and many other issues that jeopardize our people's ideals and our collective security", Pompeo said at the NATO foreign ministers meeting in Washington.

NATO Sec Gen Stoltenberg Says Hitler, Stalin and Daesh Were Enemies of Freedom
Since taking office in January 2017, US President Donald Trump has repeatedly criticized NATO as an obsolete organisation and blasted EU allies over their failure to meet the 2-percent GDP defence spending target, prompting speculation that the US president might pull his country out of the military alliance.