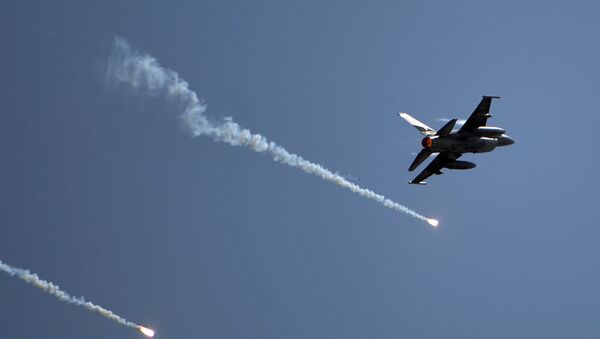 Earlier, Pakistan denied loosing or even scrambling any F-16 jets for a dogfight with the Indian Air Force on 27 February. Responding to the contradictory claims from New Delhi, Islamabad noted that it was "immaterial" whether it had used F-16s or JF-17. At the same time, Pakistan is only allowed to use the American aircraft to fight terrorism.

The Indian Foreign Ministry's spokesperson said during a questions and answers session today that the use of F-16s by Pakistan in an aerial clash on 27 February, which led to a downing of at least one Indian Air Force (IAF) jet, is a solid fact. He further said that according to New Delhi's understanding of the conditions of Pakistan's F-16 purchase from the US, Islamabad was not permitted to use them in the dogfight with the IAF.

"Fact of the matter as far as we are concerned is that it was used and we understand as per the understanding of the use of F-16 between Pakistan and the US, it should not have been done", he said.

What is more, the spokesman said that India had "flagged" the incident to the US and is now awaiting a response from Washington to clarify whether Pakistan was allowed to use the jets in the February incident or not.

Following an airstrike on alleged Jaish-e-Mohammed (JeM) positions in Pakistani territory by the Indian Air Force (IAF), Pakistani fighter planes allegedly downed two Indian jets and captured their pilots in response to the strikes. Delhi claims to also have downed one Pakistani jet, namely an F-16, which was procured to Islamabad from the US to fight terrorists.

Pakistan denies losing a plane and even using F-16s in the first place. At the same time, Pakistan's Armed Forces stated that whether or not its Air Force had used F-16 jets is "immaterial", as the Indian fighters were downed in self-defence. Islamabad denies the existence of JeM camps on its territory and says the IAF hit an empty hillside during the air raid.

The incident has led to an escalation of tensions between the two states and was followed by numerous exchanges of fire across the Line of Control. Pakistan released a captured pilot as a "peace gesture", calling for a diplomatic solution to the crisis.