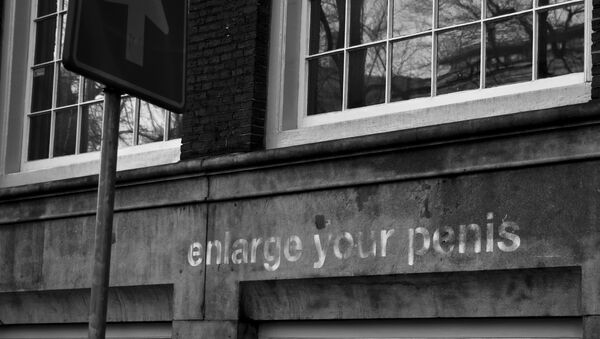 CC BY-SA 2.0 / Arden / Enlarge your penis
Subscribe
The Iraqi Kurd, who came to Austria years ago, had his residency permit withdrawn in 2011 over his criminal record. However, he did not leave the country despite several offences that culminated with the murder of his reported fiancée. These details have prompted debates about the asylum system in Austria.

Vienna’s Regional Court has convicted an immigrant from Iraq, Daban K. of murdering his partner, also an Iraqi and mother of seven (or five, according to some reports), after staying in Austria illegally for years. The jury has sentenced him to life in prison, although the decision is not final.

The 40-year-old has admitted to stabbing 50-year-old Nagsha R., in whose apartment he lived over recent months and whom he reportedly wanted to marry, to death after previously denying his guilt and claiming that she had wounded herself numerous times.

According to the defendant, the murder occurred after one of his arguments with the woman, he referred to as Rosa. Talking about their relationship, he claimed, as cited by the Austrian newspaper Der Standard, that he “loved this woman a lot”. Yet, after a wedding in accordance with religious laws last year, she allegedly no longer wanted to have sex with him. She also reportedly argued with him over his hashish consumption and had insulted him.

He alleged that she also received male guests and had cheated on him.

"She cheated on me three times with other men and did not want to sleep with me anymore, and, at some point, she said my penis was too small”, he told a psychiatrist, according to the Austrian outlet Heute.

He even claimed that on the day of the murder last autumn an Iraqi on the street was waiting to give her 3,000 euros for plastic surgery. The defendant insisted that the stabbing had been an act of self-defence as she had threatened him with a knife, saying “I'm going to kill you because you're not a man!" He noted that he snatched the weapon from her and "saw all in black" before stabbing the victim "blind with anger" without allegedly remembering the details.

According to the couple’s neighbour, he heard the woman screaming "Save me, he wants to slaughter me!" before running to the apartment, opening it as the door was not locked, and seeing Daban slashing her. Then the man reportedly piled an armchair, table and, shawls over the lifeless body and left the flat calmly.

When the details of this grisly murder became public it raised questions about the Austrian asylum system, according to oe.24.

The website points out, that his asylum application was reportedly rejected in 2005, but he could not be deported for he was "entitled to subsidiary protection". This status was withdrawn in 2011 after the man was convicted of extortion, so he was expelled to Iraq but did not obey the order and even filed another asylum application. In 2016, the man was reportedly sentenced to imprisonment for trafficking, then, received nine months more for causing bodily harm.

However, he was not jailed due to being considered unfit for detention. This was rejected after a psychiatric report but he still contested the decision in court and walked free. Even after his residence permit was denied in 2017, he filed another appeal and remained in the country.

000000
Popular comments
ian, fear beating ? ah bon ! so information should be manipulated and the illegal refugee should become a nice white gentleman and his penis should be a very big beautiful engin and the woman should become a prostitute that merits to be killed ? poor man, go for a walk in Disneyland ! And what about the Golden Retrievers, you do not like that also ? Become a journalist yourself and make your own blabla so you do not have to read the real news here !
Djodj
4 April 2019, 13:33 GMT3
000000
ian, the only thing that I say and that hurts me is that you have no right at all to ask for manipulation of information ! the info is about an illegal person that kills a innocent woman so why would you like to censor and manipulate that info ? you do not like reality ? you prefer fake news ? you prefer we do not know about it ? then yes this revolts me a max that you want me not to know the real thing ! just that !
Djodj
4 April 2019, 14:25 GMT3
000000
Newsfeed
0
New firstOld first
loader
LIVE
Заголовок открываемого материала
Access to the chat has been blocked for violating the rules . You will be able to participate again through:∞. If you do not agree with the blocking, please use the feedback form
The discussion is closed. You can participate in the discussion within 24 hours after the publication of the article.
To participate in the discussion
log in or register
loader
Chats
Заголовок открываемого материала
Worldwide
InternationalEnglishEnglishMundoEspañolSpanish
Europe
DeutschlandDeutschGermanFranceFrançaisFrenchΕλλάδαΕλληνικάGreekItaliaItalianoItalianČeská republikaČeštinaCzechPolskaPolskiPolishСрбиjаСрпскиSerbianLatvijaLatviešuLatvianLietuvaLietuviųLithuanianMoldovaMoldoveneascăMoldavianБеларусьБеларускiBelarusian
Transcaucasia
ԱրմենիաՀայերենArmenianАҧсныАҧсышәалаAbkhazХуссар ИрыстонИронауОssetianსაქართველოქართულიGeorgianAzərbaycanАzərbaycancaAzerbaijani
Middle East
Sputnik عربيArabicArabicTürkiyeTürkçeTurkishSputnik ایرانPersianPersianSputnik افغانستانDariDari
Central Asia
ҚазақстанҚазақ тіліKazakhКыргызстанКыргызчаKyrgyzOʻzbekistonЎзбекчаUzbekТоҷикистонТоҷикӣTajik
East & Southeast Asia
Việt NamTiếng ViệtVietnamese日本日本語Japanese俄罗斯卫星通讯社中文（简体）Chinese (simplified)俄罗斯卫星通讯社中文（繁体）Chinese (traditional)
South America
BrasilPortuguêsPortuguese
NewsfeedBreaking
08:36 GMTHaiti Dismisses Highly-Criticized Electoral Council, Prime Minister’s Office Says
08:34 GMTBeijing on Exclusion From Dukovany NPP Project: We Hope Prague Will Respect Market Rules
08:30 GMTDemi Lovato Opens Up About 'Warm and Loving' UFO Interaction
08:27 GMTBudapest Summons Kiev's Ambassador to Discuss Reaction to Gas Deal With Russia, Reports Say
07:58 GMTYouTube Bans False Content Casting Doubt Over Elections in US, Germany
07:56 GMTPolice Chief in Utah Takes Leave of Absence Amid Gabby Petito 911 Call Handling Probe
07:48 GMT'Impossible': Baghdad Politician Explains Why Iraq and Israel Are Nowhere Close to Normalising Ties
07:46 GMTR. Kelly's Negative Net Worth Grabs Attention on Twitter: 'How He's Gonna Pay the Lawyers?'
07:24 GMTMacron: Greece to Buy Rafale Jets, Three Frigates From France in Deal 'Boosting EU's Independence'
06:54 GMTHikers Find Live Nazi Grenade From World War II Near Swedish Ski Resort
06:48 GMTScania Scandal: Swedish Carmaker Investigated for Bribery Over Deal With Indian Minister
06:37 GMT25 Injured After Explosion in Residential Building in Gothenburg, Sweden, Reports Say
06:13 GMTGerman Chancellor Candidates in Focus as Tough Coalition Talks Loom
05:53 GMTBrexit to Blame: Germany's Olaf Scholz Says 'End to Freedom of Movement' Fueled UK Petrol Crisis
05:37 GMTUK Motorist Runs Over 'Knife-Wielding' Man Amid Alleged Petrol Dispute - Video
05:23 GMTPatriarchy Strikes Back? Iceland's Historic Female-Majority Parliament Up in Smoke After Recount
04:43 GMTUS Marine Colonel Put in Brig For ‘Asking for Accountability’ Over US Departure From Afghanistan
04:03 GMTWitness Who Claims She Saw Prince Andrew Dancing With Giuffre at Club to Testify in Court - Report
03:24 GMTBennett Claims He Said 'No Three Times’ to President Biden During Their August Meeting
03:16 GMTRepublicans Slam DHS Chief Mayorkas for Allowing Thousands of Haitians Into US