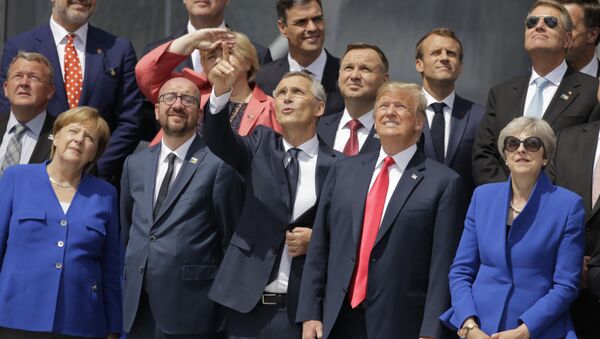 © AP Photo / Markus Schreiber
Subscribe
International
India
Africa
US President Donald Trump, who is well known for his criticism of the North Atlantic alliance, noted that his strategy of pressuring NATO members to increase their defence spending is leading to tens of billions of dollars more in contributions, yet it is still not enough.

During talks with NATO Secretary General Jens Stoltenberg at the White House a day before the meeting of NATO foreign ministers in Washington, the US president claimed that the financing of NATO is “a rocket ship up” since he took office back in 2016.

Between 2016 and the end of next year, the 28 NATO members other than the United States will have boosted military spending "another $100 billion more by 2020 or a little bit into 2020," Trump confirmed.

The US President also said he would like to see NATO members pay more than 2 percent of their gross domestic product for defence – a shift from Trump’s speech last year when he told NATO leaders to increase defense spending to 4 percent of GDP, adding that the United States pays 4.3 percent of its GDP to NATO.

Stoltenberg has said that the 2% guideline was not invented by the United States and was a target the 29 allies set in 2014 before Trump took office. However, he thanked Trump for his “strong commitment to NATO” and for his leadership in getting member nations to increase their commitments, adding that “the allies are really stepping up.”

"The clear message from President Trump has helped — is having a real impact. And this is about doing what NATO allies have pledged to do. We still have a long way to go — much to do — but we have really seen very strong progress in defence spending from NATO allies."

‘You Need to Have an Enemy’: NATO’s Endless Expansion Keeps Weapons-Makers Flush
Trump also underscored that Germany, in particular, is not doing enough, as Berlin now plans to spend 1.5% by 2024, which is lower than the 2% guideline.

“Germany honestly is not paying their fair share,” he said. “I have a great feeling for Germany, but they're not paying what they should be paying. We're paying for a big proportion of NATO, which is basically protecting Europe. They’re paying close to 1 percent.”

Trump has criticised the alliance since before he became president, at one point declaring NATO to be "obsolete." He later revised that statement, saying he no longer believed that to be the case during Stoltenberg's visit back in 2017.

The White House also issued a statement saying that Trump met with Stoltenberg to mark NATO’s 70th anniversary and reaffirm US support for the alliance. The statement said the two leaders “reviewed NATO’s unprecedented progress to increase burden-sharing” and also discussed “ongoing efforts to fight terrorism (and) check Russian aggression.” Trump emphasised the importance of a stronger NATO in opposing Russia during the meeting, yet underscored that he still believes that the relationship with Moscow will be good, adding that he hopes to “get along with Russia.”