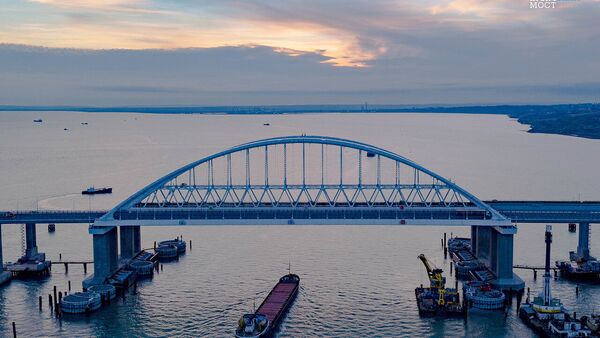 “Negative. We do not understand what is meant, the situation with the Kerch Strait and shipping is well known, and in accordance with international law, Russia's position is very consistent, and it is also well known,” Peskov said when asked how the Kremlin assesses NATO's statement about plans to send ships to the Kerch Strait.

Russia
EU Imposes Sanctions on 8 Individuals Over Kerch Strait Incident - Statement
When asked under which circumstances Russia could allow NATO vessels to enter the Kerch Strait, Peskov said Moscow considers hypothetical arguments to be incorrect, adding that a decision will be made if a relevant request is received.

Speaking on the issue, Russian Deputy Foreign Minister Alexander Grushko said Wednesday that an increase of NATO activities in the Black Sea entails risks to the security of the entire region.

"Our positions are clear: any NATO efforts in the Black Sea region are senseless from a military point of view. They will not strengthen the security of either the region or NATO itself, but will be associated with additional military risks," the diplomat said.

Russia is ready for any changes in the military security in the Black Sea region and will take additional defense measures if necessary, Grushko added.

US Ambassador to NATO Kay Bailey Hutchison said Tuesday that the United States was working on a package of measures that included air surveillance and more NATO ships going into the Black Sea. The proposal is expected to be presented to the foreign ministers at the upcoming NATO meeting in Washington.