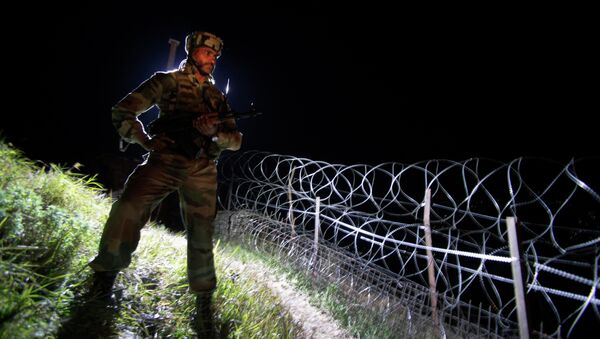 The report comes as heavy cross-border firing and shelling continues between India and Pakistan, which have seen another wave of escalation in the seven decades-long conflict since mid-February.

During a meeting of the Cabinet Committee on Security on Tuesday, Indian National Security Adviser Ajit Doval told Prime Minister Narendra Modi that the three branches of the country's defence forces — Army, Air Force, and Navy — were ready for another action against Pakistan, India TV News reported.

3 Pakistani Soldiers Killed as Heavy Firing Continues Between India and Pakistan
Modi reportedly asked the military to make sure that no civilians died the neighbouring country and that the targets be military-related.

Neither India's Defence Ministry, nor the Modi government has confirmed the reports yet.

The development comes just a day after local media cited the Director-General of Pakistan’s Inter-Service Public Relations as saying that Islamabad was entitled to use any means of self-defence — a claim which followed weeks of denial that Pakistan had used a US-built F-16 in a 27 February dogfight with India:

"Whether it was F16 or JF17 which shot down 2 Indian aircraft is immaterial. Even if F-16s have been used as at that point in time complete PAF was airborne including F16s, the fact remains that Pakistan Air Force shot down two Indian jets in self defence. India can assume any type [of plane] of their choice even F-16. Pakistan retains the right to use anything and everything in its legitimate self defence", the official reportedly said.

The militaries of the nuclear arms-wielding nations have come up with competing claims regarding the aerial combat on 27 February over the Line of Control in the disputed area of Kashmir: while Islamabad alleged it had brought down two Indian planes, New Delhi admitted to the loss of only one of its aircraft and made a counter-claim, saying it had destroyed a Pakistani F-16.

India Sends Note Verbale to Pakistan for Release of Indian Prisoners - Source
Pakistan has flatly denied that US-made F-16s were either deployed or lost, while India claimed that Islamabad could have violated the fighter jet's sale deal with the United States.

The tensions between the two neighbours, who have been embroiled in a conflict since 1947, were exacerbated by a deadly suicide bomb attack allegedly claimed by Pakistan-based Jaish-e Mohammad on a convoy of Indian military personnel in Pulwama on 14 February. In response to the attack, the Indian Air Force conducted an air raid on a suspected terror camp in Balakot, Pakistan on 26 February, later claiming it had killed 300 terrorists.