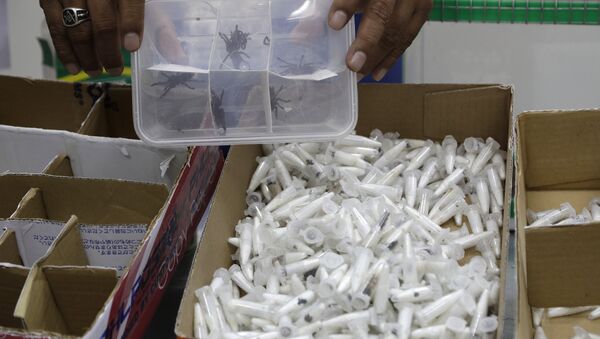 Filipino customs officials seized more than 750 tarantulas in a gift-wrapped box of cookies and oatmeal at a mail exchange center near Manila’s Ninoy Aquino International Airport.

Originating from Poland, the package arrived at the mail center containing baby tarantulas inside small DNA sampling vials and adult ones inside see-through plastic containers, according to AP. Many of the containers had been punctured, presumably for air supply.

Authorities later arrested a Filipino man who tried to claim the package, which was labeled as "collection items." The value of the package is estimated to be around $5,900.

The Philippines imposes heavy fines and imprisonment on those convicted of smuggling wild animals. In recent months, authorities in Manila have seized numerous packages containing wildlife: earlier this year, authorities at Manila airport discovered 1500 live turtles inside luggage arriving on a flight from Hong Kong.

Sergio Henriques, conservation biologist and chairman of the spider and scorpion specialist group for the International Union for the Conservation of Nature (IUCN), recently told National Geographic, "Smuggling is rampant-it's widespread globally."

The illegal trade in animals is a multibillion-dollar industry, and elephants and rhinos are among the hardest-hit by it, but it affects many more species, not only the large and iconic. The outlet noted that smuggling in tarantulas in particular may be driven by collectors who will pay hundreds of dollars for a single arachnid.

Typically, the spiders are caught to be pets or so they can be bred. Other times, tarantulas are killed and used in display boxes for keychains or paperweights.

Tarantulas' long lives make them especially vulnerable to poaching. The females, which can live up to 30 years, reproduce late in life and infrequently, National Geographic notes. More than 900 species of the spider have been identified, with many common and some threatened or critically endangered. However, the vast majority of tarantula species haven't been studied fully in the wild, Henriques said.

Earlier this year, a Japanese man was arrested at Sydney Airport after the Australian Border Force (ABF) found 10 shingleback lizards, a protected species, in his luggage.