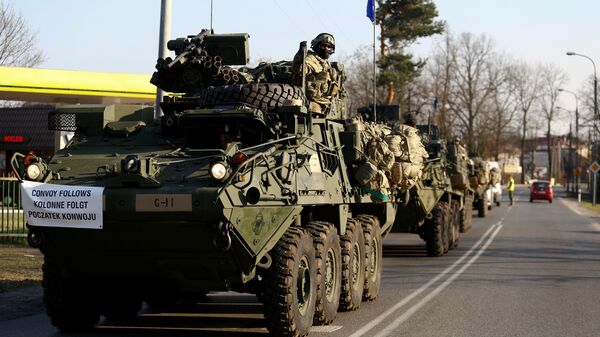 Foreign ministers of NATO members are meeting in Washington, DC, this week to mark 70 years since the bloc’s founding. However, the real purpose of NATO isn’t defensive, but to expand its global reach, a former US State Department official told Sputnik.

NATO has "conducted operations, including wars where the suffering is immense, the dead number in the hundreds of thousands in places like Afghanistan and Libya," Matthew Hoh, a winner of the Ridenhour Prize for Truth Telling who resigned in 2009 from the State Department over the American escalation of the war in Afghanistan, and who served in the US occupation of Iraq prior as a US Marine, told Radio Sputnik's Loud and Clear Wednesday.

The North Atlantic Treaty Organization (NATO) mutual defense alliance was formed in 1949 as Western European capitalist states began to prepare for the coming international military and political competition with the Soviet Union and the new socialist states that had arisen in Eastern Europe and East Asia after World War II. The Eastern Bloc's counterpart, the Warsaw Pact, wasn't signed until 1955 when NATO expanded to include West Germany. Until 1991, only two changes were made to its membership: Spain was added to the alliance in 1982, following its transition to a democratic government, and France left the alliance administratively in 1966 amid a flurry of Gaullist nationalism. (France returned fully to the alliance in 2009.)

But it's been 28 years since the Soviet Union was dissolved and the Warsaw Pact along with it, so why does NATO still exist?

Hoh told Sputnik "its purposes are really to not just maintain United States, and then by extension Western European dominance and control and exploitation of the world, but to expand it, because NATO is not confined strictly to Europe."

​"Its greatest expansion was in the 1990s, when 13 countries joined it, bringing NATO right up to the border of Russia," Hoh told hosts Brian Becker and John Kiriakou. Nearly all of those countries had been Soviet allies in the Warsaw Pact just a handful of years before.

Moreover, there are conflicting reports from some of the central figures of the Soviet Union's demise that US President George H.W. Bush had promised not to expand the alliance eastward and capitalize on Soviet misfortune. A 2009 Der Spiegel article weighed the sides of the debate.

Mikhail Gorbachev, who was Soviet president at the time of the Union's collapse, maintains he was promised NATO wouldn't expand "as much as a thumb's width further to the East." His own foreign minister, Eduard Shevardnadze, has denied that such assurances were given, but that's because neither side foresaw the dissolution of the Warsaw Pact, either.

However, Hans-Dietrich Genscher, who was West Germany's foreign minister in 1990 when the two Germanies were reunified, told Shevardnadze in now-declassified documents that a unified Germany "raises complicated questions" about NATO membership, but added, "For us, however, one thing is certain: NATO will not expand to the east… As far as the non-expansion of NATO is concerned, this also applies in general."

"NATO went to such an extreme to take or poach all these countries we had told the Russians we would not take… to basically recreate the hostilities of the Cold War," Hoh said. "So now, when you ask what do we need NATO for, if we were on CNN or MSNBC or Fox, they would say ‘because of the Russian threat,' but that Russian threat is really because NATO has gone right up to its borders."

Hoh noted the extreme irony and contrast between the NATO summit being held in Washington, DC, this week, and the peak blooming time for the city's thousands of cherry blossom trees, many of which were gifts from the Japanese government, Sputnik reported. "The context of that is friendship between nations," he said, "and NATO is the absolute antipathy of friendship; it really is a means and a conglomerate for domination."

Hoh, who quit his State Department job in 2009 in protest of US President Barack Obama's escalation of the US war in Afghanistan, told Sputnik that years of working to prosecute that war, which was directed by NATO, had left him "broken inside" and "destroyed me morally. I had really betrayed who I was."

"Most of the people who go in have been fed the myth that they were going to be doing the right thing, that they're going to be part of a force for good," Hoh said of recruits who join the military, like he did the US Marine Corps in 1998. "I didn't think the United States was going to be involved in a war, again, of occupation," like it had in Vietnam. "When I was a lieutenant, colonels and generals in the Marine Corps who had served in Vietnam swore up and down that was never gonna happen again. And sure enough, first chance [they get], they go along with it."

"I was in Iraq twice, and then went to Afghanistan and expected it to be different, for some reason, under the Obama administration, different under General [David] Petraeus' command, because statements had been made that we were gonna end this war politically," Hoh said.

"You basically have this experience where [people] you are present among are being victimized by your presence," Hoh said. "What happens alongside — and this goes back, this is a standard playbook for the United States government for centuries now, I mean this is what we did with the Native American tribes — you pit one against the other. That's what the catalyst for the war in Afghanistan was back in the late 1970s. This goes back to the [Jimmy] Carter administration: Zbigniew Brzeziński, his national security adviser, wanted to use different ethnicities, as well as the Muslim population in the Soviet Union, to basically light a fire in the belly of the Soviet Union and cause unrest."

That goal, he said, informed US policy in Afghanistan from the 1970s until today. "The US military relies… extensively on that all around the world," from Afghanistan to Iraq and Syria, as well as in countries where NATO-affiliated nations are carrying out operations under another banner, such as Canadian and Dutch operations against rebel forces in Mali.

"We use those ethnicities to do our business, to subjugate and to control these countries."