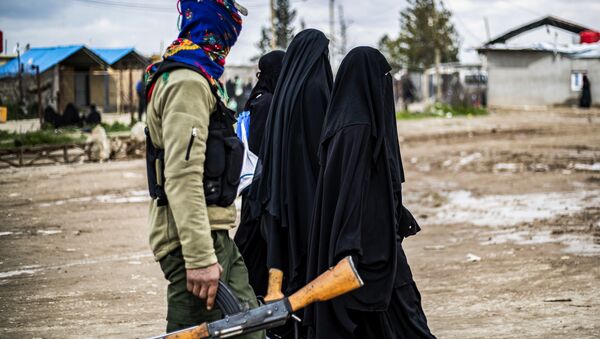 © AFP 2021 / Delil SOULEIMAN
Subscribe
Earlier on Monday, the Australian broadcaster ABC reported that surviving children of Australia's “most notorious convert” to Daesh* Khaled Sharrouf are being held in the Kurdish-controlled al-Hawl refugee camp in northern Syria.

Australian Prime Minister Scott Morrison has ruled out the possibility of helping the children of Australian Daesh member Khaled Sharrouf in the wake of reports about the children being held at a Syrian refugee camp.

Morrison told reporters in Canberra that he is not going “to put one Australian life at risk to try and extract people from these dangerous situations”.

“I think it’s appalling that Australians have gone and fought against our values and our way of life and peace-loving countries of the world in joining the Daesh fight. I think it’s even more despicable that they put their children in the middle of it,” he underscored.

Morrison’s remarks came after the Australian news network ABC reported that Sharrouf’s three remaining children had fled the siege of Daesh’s last stronghold Baghouz in southern Syria in mid-March and were then taken by Kurdish forces to the al-Hawl refugee camp about 300 kilometres north of the conflict.

The children’s mother Tara Nettleton reportedly died of a medical condition in 2015 after she followed Sharrouf to Syria from Sydney.

Nettleton’s mother urged the Australian government to help her surviving grandchildren return to the country, telling ABC that the kids are with “other Australian and foreign fighters [in the camps] and they shouldn’t be in amongst all of that”.

Earlier, Australian Home Affairs Minister Peter Dutton said that  the “full force of the law” would be used against returning adult Daesh militants but that their children should be given assistance and placed with other families.

Many in West Fail to Embrace De-Radicalization as Daesh Jihadis March Home - PhD
In February, UK Home Secretary Sajid Javid revoked the citizenship of jihadi bride Shamima Begum, who was placed in a displacement camp in Syria after fleeing the fast-shrinking areas under Daesh terrorists’ control.

In a separate development, US President Donald Trump tweeted in late February that he'd told Secretary of State Mike Pompeo not to allow Hoda Muthana, an Alabama woman who left in November 2014 to join ISIS, to return to the United States.

The UN and International Rescue Committee  meanwhile reported that since December, at least 80 people, mostly children under the age of one, have died in the al-Hawl displacement camp, which reportedly shelters thousands of the wives and children of converts to Daesh from more than 40 countries.