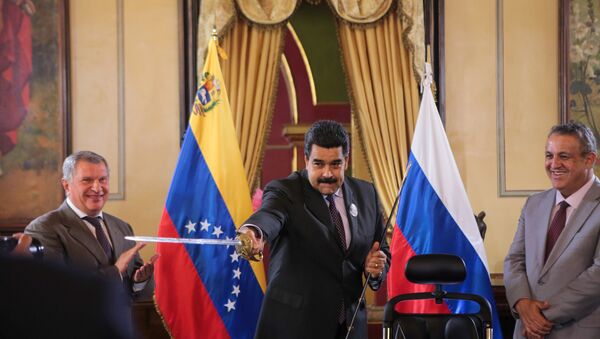 The Venezuelan President blamed the opposition for its attacks on the power grids as he announced a 30-day power rationing plan.

Venezuelan President Nicolas Maduro said Sunday that the attacks on Venezuela's power grid are a part of the opposition's plan, that seeks to "sow violence and chaos."

"On 25 March, a new wave of attacks began after we had restored service," Maduro said in his TV address. "This is the plan of the opposition's coup, which seeks to sow violence and chaos."

​In his official statement on Twitter, Maduro also blamed the power outages on "terrorist attacks, perpetrated by criminals who have already announced their intent so blatantly in various public speeches."

"These were ‘electromagnetic attacks’ that damaged power transmission lines," Maduro said in a TV address.

"These attacks, varied in nature, have caused a significant amount of equipment damage and interrupted processes necessary for the constant provision of power," the written statement reads.

​In order to mitigate the power issues that Venezuela continues to struggle with following the alleged attack on the Guri hydroelectric dam, Maduro has announced a power rationing scheme that will last 30 days.

"I have approved a 30-day plan to enter a regime of [grid] load management, of a balance between [power] generation, secure transmission, maintenance and consumption throughout the country," he said in his TV address.

He also ordered the suspension of school activities and a reduction of working hours, saying that public and private institutions would only operate until 2:00 p.m., adding that the government is continuing to make every effort to restore the power grid to its full capacity, as well as investigate possible "moles" within the electric service.

"We are investigating infiltrator elements within the electric service that may serve as moles to cause damage from within," Maduro said in his TV address.

Technical specialists warn that the power grid remains in a critical state and that more blackouts may happen.

"This is going to continue, the situation is very serious, there will be more blackouts and rationing," Winton Cabas, president of the Venezuelan association of Electrical and Mechanical Engineering, said, according to AFP. "The whole power grid is barely generating between 5,500 and 6,000 megawatts, when it has the capacity to generate 34,000 megawatts."

Trump's Rep Reveals How US Wants Maduro's Rule in Venezuela to End
In the meantime, Maduro praised the support of the people, who stood united in the face of challenges.

"I congratulate our people, who have maintained monolithic unity, civil behaviour and solidarity — everything that makes us indestructible," he said in the statement.

"We will win in this electric war," Maduro said in the statement.

As the government restored power in the capital city of Caracas, opposition leader Juan Guaido initiated his "Operation Freedom" in the city's outskirts, where the power situation remains highly volatile.