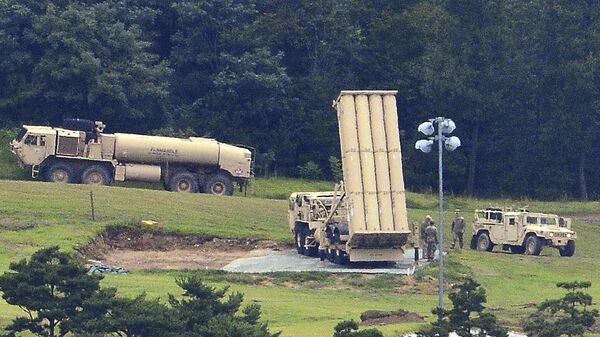 A rapid-deployment drill involving the US military and Israel Defense Forces (IDF) wrapped up on Monday in which they deployed the powerful THAAD missile defense array. The muscle flex comes just a week before a challenging election for Israeli Prime Minister Benjamin Netanyahu, who has played up his closeness to Washington on the campaign trail.

A five week-long test of the Terminal High Altitude Area Defense (THAAD) missile system in southern Israel concluded Monday. Since March 4, 250 US officers and soldiers, plus 15 Israeli Air Force (IAF) personnel, have trained at the Nevatim Airbase on quickly deploying the missile defense system in Israel.

"The THAAD was deployed in Israel; we did a month of exercises with it. At the end of this month, it will go back to its place, and we will have improved our air defenses," IAF Col. Guy Amosi told The Times of Israel over the phone. "We learned tons."

Deputy Commander of the US Army in Europe Maj. Gen. Andrew J. Rowling said the purpose of the drill was testing US troops' ability "to rapidly deploy a THAAD system thousands of miles across the globe, and then integrate into one of the most complex missile defense architectures in the world… The ability to rapidly surge combat-ready forces into and across the theater is critical to projecting forces at a moment's notice, to support our Allies and partners across the theater."

​The US and Israel have a defensive agreement by which Washington would provide Tel Aviv with missile defense in the event of war, The Jerusalem Post noted.

This was the first time THAAD has been deployed to Israel, where it will become a new layer in Israel's multifaceted missile defense network. The protective systems include the short-range Iron Dome, the exoatmospheric Arrow system and the David's Sling missile defense system, which is designed to intercept tactical ballistic missiles, medium- to long-range rockets and cruise missiles fired at ranges between 40 kilometers and 300 kilometers, according to the Jerusalem Post. THAAD, which intercepts long-range ballistic missiles in their re-entry stage, fills a gap by protecting against ballistic missiles at ranges of up to 200 kilometers and altitudes up to 150 kilometers.

However, the Times of Israel noted that the AN/TPY-2, an X-band radar array and key part of the THAAD system that searches for inbound missiles, has been deployed in Israel for a decade. The system can provide early warning against ballistic missile launches from almost 3,000 miles away, and is intended to prepare Israeli defenses to intercept potential missile attacks from Iran, which is roughly 600 miles from Israel at the two nations' closest points.

"The cooperation between the Air Defense Array and its American counterpart emphasizes the professionalism and operational strength that brings better protection of the skies of Israel," IAF Brig. Gen. Ran Kochav, commander of Israel's Aerial Defense Division, said in a statement. "The system is integrated as an equivalent of the Israeli Arrow Weapons System and brings with it complementary capabilities. Thanks to the professional relationship and the joint training, we are better prepared for real-life challenges."

"We are in a pre-election period in Israel," former UK ambassador to Syria Peter Ford told Sputnik in February in comments about a mistaken Netanyahu tweet calling for war with Iran. "This sounds like Netanyahu flexing his muscles, showing that he's the best military leader… He's brushing up his military credentials, trying to ramp up the crisis atmosphere in which he tends to flourish, ramping up the Iran threat."

​Last month, US President Donald Trump made the decision to unilaterally recognize Israel's claim to sovereignty over the Golan Heights, a territory north of the Sea of Galilee it seized from Syria in 1967. Ariel Gold, a peace activist and co-founder of anti-war group Code Pink, told Sputnik the move was "an election gift from Donald Trump to Netanyahu, because Netanyahu's been taking some hits recently in the polls, due to his pending indictment, and so this really helps him to — I'm sure Trump hopes — regain his advantage." She noted that Netanyahu's re-election campaign has focused heavily on his close relationship with Trump, with large billboards and election banners for Likud featuring their likenesses.