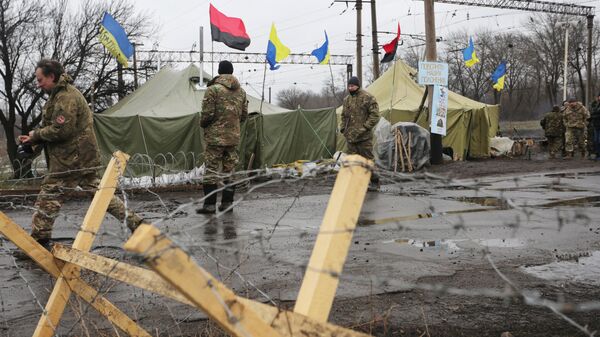 © AFP 2023 / Aleksey FILIPPOV
Subscribe
International
India
Africa
DONETSK (Sputnik) - Ukrainian security forces are conducting special operations along the contact line in the eastern region of Donbass to prevent Ukrainian citizens from crossing over into the Kiev-controlled part of the country, a spokesperson of the Ministry of State Security for the self-proclaimed Donetsk People's Republic (DPR), said Sunday.

According to the DPR spokesman, the measure aimed at preventing Ukrainian citizens to vote against incumbent Ukrainian President Petro Poroshenko.

"The DPR intelligence services received information that Ukrainian security forces were conducting mass operations along the 20-kilometer (12-mile) contact line with the intention of filtering and stopping Ukrainian citizens from entering polling places in towns across the line. The main goal of such illegal operations is to isolate [Ukrainian] citizens, who may vote against the incumbent President Petro Poroshenko, from the election", the representative told journalists.

The contact line in Eastern Ukraine separates the two self-proclaimed people's republics of Donetsk and Luhansk (DPR and LPR) of the Donbas region from the Kiev-controlled government and was established after the conflict which erupted in 2014 when local authorities refused to recognize a newly elected Ukrainian central government and claimed independence.

Have a Deeper Look Into Presidential Election Process in Ukraine
The Ukrainian presidential elections took place on Sunday. Ukrainians were choosing among 39 presidential candidates. According to the exit polls, Volodymyr Zelenskiy and incumbent Ukrainian President Petro Poroshenko have made it into the run off set for 21 April.

Russia has condemned Ukraine’s decision to bar its observers from polling places, which it said undermined the vote’s legitimacy and could affect Moscow’s decision to accept the outcome. Up to 10 million Ukrainians in Russia and breakaway eastern provinces have been disenfranchised.