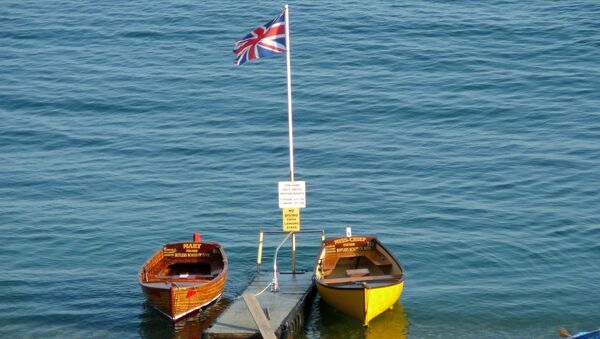 MOSCOW (Sputnik) - The Home Office has not backed the idea of deploying a fleet of nine catamarans to the English Channel to prevent illegal border crossings into the UK despite the fact it would have been slightly more expensive than operating a few Border Force cutters, The Sunday Times newspaper reported.

One more fuel efficient catamaran would have cost taxpayers less than 1.8 million pounds ($2.3 million) annually, that is just over 16 million pounds for the whole fleet, while 4.6 million pounds are required to operate each Border Force cutter, according to the news outlet.

This comes after in January 2017 a former major in the Royal Marines, Duncan Higham, who owns SSI Risk Management company, proposed the government to deploy a fleet of MPC19 catamarans to the channel to help tackle the problem of illegal crossings by migrants, the newspaper said on Sunday.

UK to Spend Over $7Mln on High-Tech Equipment in Calais to Stem Migrant Tide
In the meantime, Home Secretary Sajid Javid said last December that the rising number of attempts by migrants to illegally cross the English Channel into the United Kingdom was a "major incident" after almost 100 asylum-seekers had been detained in just a few days when trying to reach the country by boat.

Javid then pledged to deploy another two UK Border Force cutters to the waterway in addition to the vessel that was already patrolling the area.

READ MORE: Over Half of Failed Asylum Seekers in UK Reside as Illegal Migrants — Report

However, only two vessels are reportedly patrolling the English Channel at the moment despite Javid's assurances.