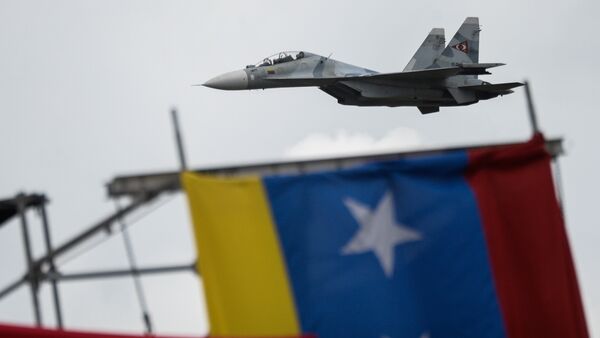 "We have explained what our servicemen are doing in Venezuela, providing, on an absolutely legitimate and legal basis, the maintenance of military equipment, which we have delivered in accordance with an intergovernmental agreement ratified by the Venezuelan parliament and absolutely in line with the Venezuelan constitution," Lavrov said in the "Moscow. Kremlin. Putin" program aired by Rossiya-1 television.

READ MORE: Russia Lambasts US Over Threats to Impose Sanctions on Moscow Over Venezuela

Venezuela Slams US Threats Against Russia, Reminds of Pentagon Military Activity
A group of Russian military personnel arrived in the Venezuelan capital of Caracas last week to take part in consultations with country's officials on defence industry cooperation, a diplomatic source in Caracas told Sputnik. According to Venezuelan media reports, 99 Russian military staff arrived in Caracas on board two planes, which also delivered 35 tonnes of cargo.

US Ally Slams Alleged Russian Military Deployment in Venezuela
On Wednesday, Trump said Russia "needed to get out" of Venezuela. Earlier in the week, Pompeo denounced in a phone call with Russian Foreign Minister Sergei Lavrov "the continued insertion of Russian military personnel" in the Latin American country.

Earlier, US Special Representative for Venezuela Elliott Abrams, commenting on the arrival of Russian military aircraft in Caracas, said that various measures could be taken by Washington, particularly in economic terms, hinting at more sanctions against Russia.

Russian Foreign Ministry spokeswoman Maria Zakharova said on March 28 that the Russian military personnel’s presence in Venezuela was fully legitimate and in accordance with the defence agreement between Moscow and Caracas. She added that the personnel would remain in the country for as long as Moscow and Caracas deem their presence necessary.

000000
Popular comments
? ? ? "First of all, explain the aggression that America is doing in Venezuela !!" enough Well, right?