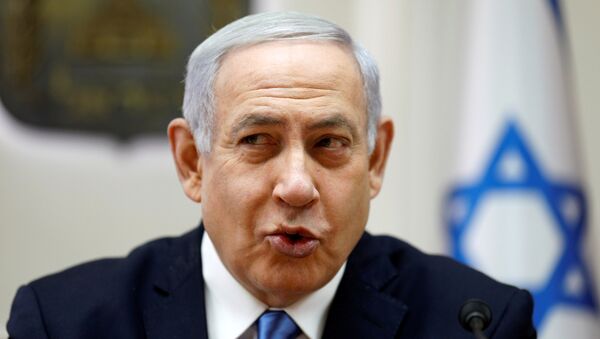 On Saturday, Palestinians marked the first anniversary of the beginning of “Great March of Return” with large-scale protest rallies along the Israel-Gaza border which reportedly left at least three people dead.

Twitter users have hit out at the Israeli Prime Minister’s spokesman Ofir Gendelman over his remarks about female Palestine protesters, whom he described as “ISIS (Daesh*) women”.

Posting a photo of four veiled flag-waving female protesters on his Twitter page, Gendelman wrote that Daesh women “also participate today in the Hamas-led riots on the Gaza border” and that it allegedly comes as no surprise “because Hamas is the Gazan branch of ISIS”.

ISIS women also participate today in the Hamas' led riots on the Gaza border. That's no surprise because Hamas IS the Gazan branch of ISIS.

Netizens were quick to question the idea of Daesh woman waving Palestinian flags, which are considered to be secular blasphemy by the terrorist group; some users also pointed to the fact that the Palestinian militant group Hamas is at war with the Sinai branch of Daesh.

Others lambasted Gendelman for “racism and Islamophobia”, claiming that he seemed to base his remark that the women were terrorists solely on the fact they were wearing niqab full-face veils.

This is nothing but racism, Islamophobia (yes, that term exists actually!) and political propaganda. You know very well that these women are not ISIS but nevertheless you spread such messages.

That's bigoted and Islamophobic, but you are the spokesperson of Netanyahu, so no surprise..

ISIS is (was) trying to build a Caliphate under its own flag. These women have Palestinian flags, which would not be acceptable for ISIS supporters— national flags go against their ideology of building a transborder entity.

You don't have any evidence to prove this. You claim this because of their traditional clothing. Neither ethical, nor professional. It's like calling all whites "supremacist terrorists" because all have the same skin-color.

They aren’t in ISIS and nothing about this looks violent or non-peaceful. This is just you being Islamophobic.

ISIS would be burning a national flag like they do everywhere they go.

Stop being disingenuous and proclaim your racism — dont be a coward — say what you mean — Jews are superior to non Jews — say it you racist fool.

Do you consider all Muslims who oppose you as ISIS? Also with national flag. OK, sounds logical. LOL!

2. ISIS rejects all nations or national flags including the Palestinian one

3. Hamas is Muslim Brotherhood and is at war with a tiny ISIS wannabe branch in Gaza

Oh come on, Hamas is part of the Muslim Brotherhood, no IS. Statements that contradict basic history don't help.

So you are so uneducated that you think any woman in a veil belongs to Isis. Really you should keep your fingers away from the keys until you know what you are talking about. Unless you're someone who will tell any lie that comes to hand.

Some users labelled Gendelman's tweet as something which makes no sense and which is “inappropriate even by Zionist standards”.

This is so inappropriate even by zionist standards

Do you think we’re all idiots?

That's a very serious charge. Do you have evidence that these women are members of ISIS?

You do realise ISIS declared war/opposition to Hamas?

You win. This is both the most ignorant and the stupidest tweet I've seen all year.

On Saturday, about 40,000 people took part in the large-scale “Great March of Return” protests along the Gaza-Israel border, marking the first anniversary of the movement.

At least three Palestinians were reportedly killed during the rallies after the Israeli troops’ crackdown on the protesters, who threw stones and explosive devices at the Israeli border.